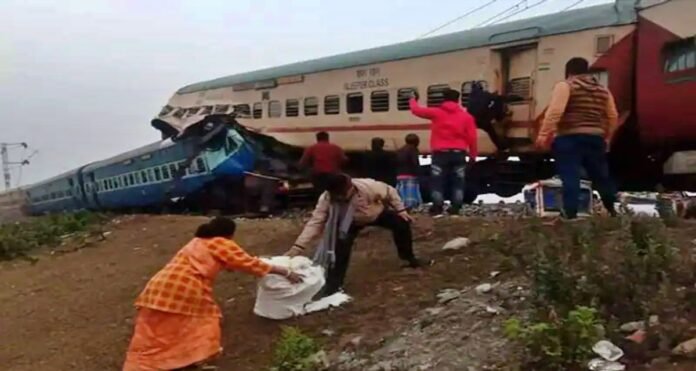 Kolkata: There has been a major train accident in West Bengal. Guwahati – Bikaner Express (15633) has derailed near Moynaguri in Jalpaiguri district. The accident happened at five o’clock in the evening. According to the information received, the news of the death of three passengers has come to the fore in this accident. 20 have been injured. At the same time, Railways has announced compensation for the casualties in the accident.

According to the information received, four to five coaches of the Bikaner-Guhavati Express derailed near Moynaguri in the Jalpaiguri district. The train was going from Patna to Guwahati. In this accident, three passengers have died and more than 20 have been injured, who have been admitted to hospitals for treatment.

While giving information on this accident, a passenger said, “There were sudden tremors in the moving train, after which many coaches overturned. Many people have also died in this accident.” According to the information received, those injured in the train accident have been sent to Maynaguri Hospital and Jalpaiguri District Hospital.

12 coaches affected
Indian Railways has issued its statement on this incident. Railways said, “Guwahati-Bikaner Express 15633 (UP) derailed around 5 pm today. 12 coaches have been affected. DRM and ADRM have reached the spot along with the accident relief train and medical van.

Issued Helpline Number
A helpline number has been issued regarding the train accident. The relatives of the people in question on the train can get information by calling on 03612731622, and 03612731623. On the other hand, Railway CPRO Shashi Kiran has also given a statement on this incident. He said, “Accident relief van for patients has left Jalpaiguri. It is not fully known how many passengers have been injured. But 308 passengers had left in this train from Bikaner.

International flight will remain banned for the time being

27/02/2021/10:53:am
New Delhi: The central government has said that the ban on international flights will continue till March 31. The Director-General of Civil Aviation i.e.DGCA...

09/10/2020/10:23:am
Seoul: At least 88 people were burned in a multi-story building in Ulsan, South Korea, on Friday morning. Officials gave this information. Video footage...

How many SIMs have been activated from your Aadhaar, you can know online like...

11/12/2021/10:30:pm
New Delhi: Many times it happens that some other person is running SIM on our identity card especially the Aadhar card and we do...