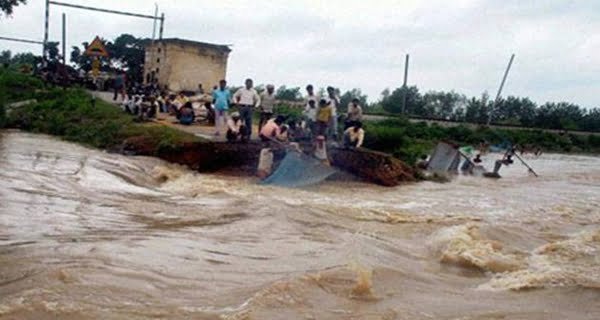 New Delhi: On Thursday, floods in Assam and Bihar made the situation worse. At the same time, UNICEF has said that 24 lakh children have been affected all over the country and they need immediate help. Four more people died in Assam in flood-related incidents. Several rivers, including Teesta, Kaljani, and Mansai are in spate in North Bengal due to heavy rains in the catchment area in the last few days. Because of this people living in low-lying areas have to go to safe places. However, the Meteorological Department said that Delhi received 50 percent more rainfall than the average in July.

Four more people died in floods in Assam. Out of the 33 districts of the state, 28.32 lakh people are affected by floods. The death toll in the state has risen to 93. Governor Jagdish Mukhi visited the flood affected areas and said that he would request the Center to find a permanent solution to the problem.

Chief Minister Sarbananda Sonowal also visited the affected area in Darang and Kamrup districts. The Assam State Disaster Management Authority (ASDMA) said in a bulletin on Thursday that one person died in Bongaigaon, Kokrajhar, Morigaon and Golaghat districts. ASDMA said that as of Wednesday, more than 26 lakh people in 26 districts were affected by the floods. The Brahmaputra River is flowing above the danger mark in Dibrugarh, Dhubri and Goalpara. The situation has worsened in Bihar too due to floods. 7.65 lakh people have been affected by the floods in the state. However, no death has been reported.

West Champaran, East Champaran, Sitamarhi, Shivhar, Supaul, Kishanganj, Darbhanga, Muzaffarpur, Khagaria and Gopalganj districts are affected by floods due to heavy rains in the catchment areas along the border with Nepal. 13 teams of NDRF and eight teams of SDRF are engaged in rescue operations. Under this, 36,448 people were evacuated to safer places. However, UNICEF estimates that more than 2.4 million children have been affected by the recent floods in the country.

UNICEF said in a statement, “Six million people have been affected by floods in India, including 2.4 million children in Bihar, Assam, Odisha, Gujarat, Maharashtra, Madhya Pradesh, Kerala, Uttarakhand, Uttar Pradesh and West Bengal.” UNICEF has said that there is a need for immediate help, more resources, and new programs to address the challenges faced by children in these areas. The meteorological department said in a tweet at 2 pm that it is likely to rain in the next 12 hours in South Bihar, Jharkhand, Vidarbha, Chhattisgarh, Karnataka and Telangana.

The department said that in West Bengal, Darjeeling, Kalimpong, Jalpaiguri, Alipurduar and Cooch Behar are expected to receive heavy rains till 28 July. In Pithoragarh in Uttarakhand, 53 families of Dhapa village were shifted to safe places due to torrential rains for the last few days. The number of dead has increased to 12 in the incident of cloudbursts in the Bangapani subdivision of the district. Two more dead bodies were removed from Tanga village.

Singapore: Last year 30 percent of deaths due to corona had been fully vaccinated

26/11/2020/10:37:pm
London: AstraZeneca and Oxford University have admitted a manufacturing error that raises questions about the initial results of the experimental Covid-19 vaccine. A statement...

01/11/2022/10:16:am
New Delhi: Bollywood actors Abhishek Bachchan, Farhan Akhtar, and famous TV presenter Maniesh Paul will be presenting at the awards ceremony of the International...

Thums Up Partners with Jasprit Bumrah

Now the rakhi made of cow dung will be tied, on...