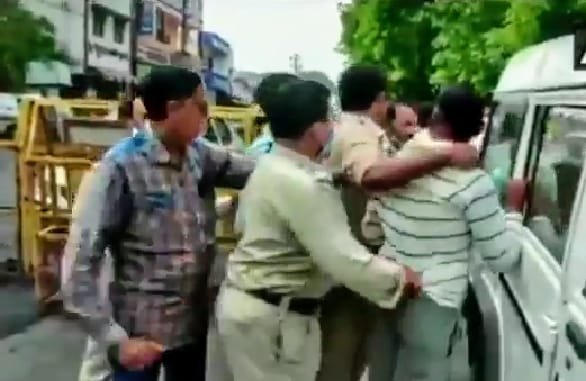 Kanpur/Lucknow: A close relative of Deputy Superintendent of Police Devendra Mishra, who was killed in an encounter just days before the notorious criminal Vikas Dubey was arrested in Ujjain, Madhya Pradesh, claimed that “it is a well-planned surrender to save him from being killed.” ” Kamalakant Mishra, a close relative of Mishra, told reporters on Thursday, “This arrest has been made with complete planning. Vikas Dubey was in Faridabad 12 hours ago and reached Mahakal (temple) of Ujjain in just 12 hours. When the police went to arrest, she took the media with her. How many arrests have you seen in this way? “

He claimed, “It is not an arrest, but he is saved from death.” This surrender is fully planned. ” He said, “No one can make up for the damage done to the family, but if the culprit is arrested, then it is a matter of satisfaction for all of us.” I don’t think the story has ended here, it is just the beginning. ” Kamal Kant said, “Not only Vikas and his gang were involved in the eight policemen killed in the encounter, but also some other people who have been rescuing him till now. Dubey has surrendered on the advice of those people. ”

Meanwhile, a senior police officer and IG Civil Defense Amitabh Thakur said in a tweet, “We could not arrest Vikas Dubey and he surrendered in Ujjain. Even after such a big incident, we could not arrest him and he roamed many places and went to a remote place. I think this point should be examined in depth. ” In another tweet, he said, “Tomorrow he may try to escape from the custody of UP police, killed. In this way, Vikas Dubey chapter will be closed, but in my view, the real need is to take a fair/harsh action on the UP police honestly seeing the filth inside.

Samajwadi Party chief Akhilesh Yadav also raised questions about whether it was an arrest or surrender. “We hear that the main accused of the Kanpur-Kand is now in police custody. If true, then the government should clarify whether this was a surrender or arrest. Also, his call records should be made public so the nexus can be exposed,” the former UP Chief Minister tweeted.

05/12/2021/11:40:am
New Delhi: Israel's intelligence agency Mossad recruited top Iranian scientists in April this year and tricked them into believing they were working for international...

Paytm Payments Bank will not be able to add new customers, but users can...

27/02/2022/5:56:pm
Washington: The US has relaxed the requirement for many visa applicants, including students and workers, to appear in person for interviews at its embassies...

Bihar Panchayat Election starts from September 29, will be held in...