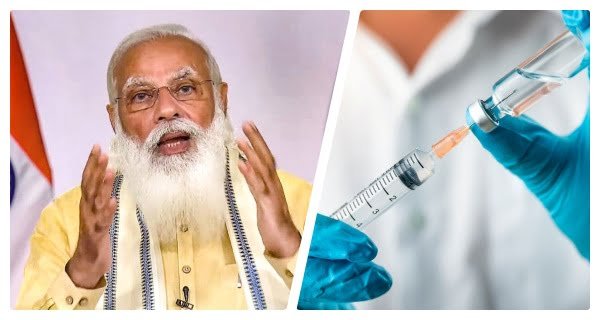 New Delhi: Prime Minister Narendra Modi addressed the nation on Monday. During this, he has made a big announcement regarding the vaccination program. Under which people above 18 years of age will be vaccinated for free from June 21. With this, the responsibility given to the states regarding vaccination has been taken.

25 percent vaccine will be given to private hospitals
Along with this, the Prime Minister also made a big deal about the vaccines being administered in private hospitals. The PM said that out of the vaccine being made in the country, 25% of the private sector hospitals can directly take this system will continue. Private hospitals will be able to charge a maximum service charge of Rs 150 for a single dose after the fixed price of the vaccine. The task of monitoring it will remain with the state governments.

This is the biggest epidemic in 100 years
Prime Minister Narendra Modi started the address by remembering the people who lost their lives due to Coronavirus. The PM said, “India has gone through a lot of pain during the Corona wave. Many of us have lost loved ones. My condolences to such families. This is the biggest epidemic in the last 100 years. The modern world had never seen a pandemic like this.”

Free grain till November
PM Modi said, “Last year the way free ration was given for eight months. The government has decided today that the Pradhan Mantri Garib Kalyan Anna Yojana will now be extended till Diwali. Under which free food grains will be available in fixed quantity every month to more than 80 crore countrymen till November.

A vaccine as a protective shield for us
The Prime Minister said, “Vaccine is like a protective shield for us in the fight against Corona. If we did not have a vaccine today, what would be the condition of a huge country like India? Many decades ago, it used to take decades for India to get the vaccine from abroad. Today India has launched the ‘Made in India’ vaccine within a year.

He said, “The number of vaccine manufacturers in the world is very small in comparison to its demand. Imagine what would have happened in India if we did not have vaccines. If we look at the history of the last 50-60 years, it would take decades for India to get the vaccine from abroad.

He said, “Research on the nasal vaccine is going on in the country. It will be sprayed in the nose, not with a syringe. If this trial is successful, it will further accelerate India’s vaccine campaign.

Corona has yet to have the worst impact on poverty: UN expert

11/09/2020/10:38:pm
Geneva: Regarding poverty, an independent United Nations expert warns that the Corona Virus epidemic is yet to have the worst effect on poverty and...

22/03/2021/5:09:pm
New Delhi: With the announcement of the 67th National Film Awards, Kangana Ranaut got her birthday gift just a day before her birthday. Kangana...

06/07/2020/10:58:am
Kanpur: The Kanpur encounter case is slowly catching up and the links are being added. Recently, CoG Mohit Aggarwal said that some police personnel...