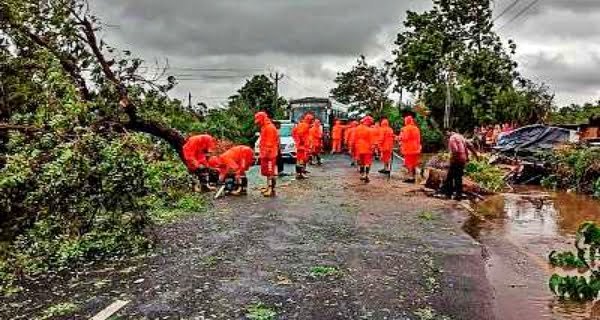 Mumbai: 14 bodies were recovered from Bombay High in the sea after the barge P-350 drowned due to Cyclone Tauktae. According to the information, 14 bodies have been recovered from the Arabian Sea. These people were aboard the Bajra P-305 which was sunk during the cyclone Tauktae. Officials said that the search for 78 missing people aboard the P-305 ferry in Mumbai is still on. On the other hand, the number of deaths due to storms in Gujarat has increased to 33.

The Navy was told on Wednesday that its soldiers have so far saved 184 of the 273 people on the barge P305 while battling extremely bad weather. He told that all the people present on the two other barges and an oil rig are safe.

It is noteworthy that these barges were trapped in the Arabian Sea near Mumbai a few hours before the cyclone Tauktae hit the Gujarat coast. A Navy spokesman said, “As of Wednesday morning, 184 personnel on the P305 have been rescued. INS Kochi and INS Kolkata are returning with these people to Mumbai port. “The search and rescue operations are on with the help of INS Teg, INS Betwa, INS Beas, P81 aircraft, and helicopters,” the spokesperson said.

INS Kochi returned to Mumbai carrying 125 of those rescued from P305
Naval warship INS Kochi arrived in Mumbai on Wednesday with 125 of the rescued people from the Barge P305. This barge was sunk in the Arabian Sea due to being trapped in the cyclone tout. 273 people were present on the barge, out of which the Navy has so far saved 184 people.

Capt Sachin Sequeira, the commanding officer of INS Kochi, told reporters, “Our vessel has returned from P305 carrying 125 of the 184 people rescued so far”. Is going at a speed. Nine to ten meters high waves are rising in the sea. In such a situation, the situation is difficult for search and rescue operations. ”INS Kochi left Mumbai on Monday to save the people present on the barge.

31/01/2022/6:24:pm
New Delhi: The ban on rallies for the upcoming assembly elections has been extended till February 11. This important decision was taken in the...

27/10/2020/10:24:pm
Brussels: The long-running feud in the Royal Family of Belgium finally came to an end when former King Albert II met his daughter. This...

29/12/2020/10:17:am
Chennai: Karima Begum, the mother of Oscar Award-winning composer AR Rahman, died on Monday. Rahman has uploaded a picture of his mother without a...

18/09/2020/9:40:pm
Mumbai: Indian Navy's disinvested aircraft carrier 'Virat' will begin its final voyage from the Naval Dockyard on Saturday and proceed to Alang in Bhavnagar...

Bats found in Air India plane, returned after taking off from...