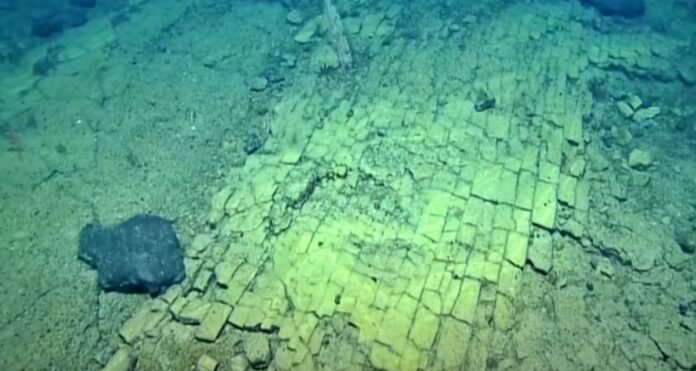 If all the secrets are hidden in the world of space, then there are many such secrets in the depths of the ocean, which are yet to be revealed. Sometimes some strange creatures come out from here and sometimes some hidden treasure is found. This time such a road (Yellow Brick Road in the Ocean) has been found at the bottom of the sea, seeing which divers and experts are also surprised. Although its exact history is not known yet.

This road found in the foothills of the Pacific Ocean has been discovered by the researchers of Exploration Vessel Nautilus. It is found in the north of the Hawaiian Islands. During an ongoing search operation in the depths of the sea, scientists saw this yellow road made of bricks. They also did not understand where did this road come from inside the sea? Or where does it go? Researchers have even jokingly called it the way to another world.

Yellow brick road
A video related to this has also been shared on YouTube by the researchers of the road-finding Exploration Vessel Nautilus. They found the road during a survey of the Liliuokalani ridge in the Papahānaumokuākea Marine National Monument (PMNM). It is one of the largest marine conservation areas in the world. If we talk about its size, then even after including all the national parks of America, it will be bigger than them. So far 3 percent of its area has been traced, of which this yellow road is also one.

What is the truth of the road?
In a video shared on YouTube, researchers can be seen looking for the yellow road under the sea. In this, rectangular blocks have been installed like the bricks of the road. Researchers are calling it the road leading to Atlantis in fun. This is a fictional island, which has a mythological Greek story of its drowning in the sea. By the way, this road-like shape is not actually a road, but the foothills of a dried-up lake. This could be a geological structure formed after the eruption of a volcano, which looks like a broken road.

15/08/2020/12:11:am
Washington: While Russia has claimed to have created the Coronavirus Vaccine, the US is still not ready to accept it. Meanwhile, news has come...

Pakistan is planning conspiracy against India! budget is one lakh dollars

07/10/2021/9:14:pm
New Delhi: Pakistan is dreaming of establishing itself as the leader of Islamic countries in Central Asia. By capturing the Taliban in Afghanistan, Pakistan...

Bulli Bai App Case: Who is girl from Uttarakhand who turned out to be...

05/01/2022/9:54:am
Dehradun: Taking major action in the context of Bully by app controversy, Mumbai Police arrested 18-year-old Shweta Singh from Uttarakhand on Tuesday and it...

China and Pakistan are happy at the return of Taliban, may...

Strong tremors of earthquake in Pakistan, Islamabad shaken by 4.5...