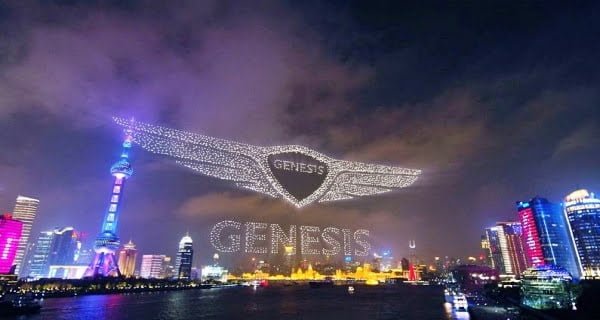 Hyundai’s luxury brand is named Genesis, which is globally known for its cars. The vehicles of this company are kept in the luxury segment. Since China is the world’s largest automotive market, Genesis entered here in a very special way. The entry started with 3200 drones where Genesis blew all these drones and made its logo in the air. This logo created in Shanghai has now created a new world record.

The name of Genesis has been recorded in the Guinness Book of World Records where the company achieved this status by blowing the most unmanned aerial vehicles i.e. UAVs in the air simultaneously. It consisted of 3281 drones. All these drones were brought together and then a logo was prepared in the sky which looked quite tremendous in the end.

It was very special for an auto brand to announce its debut in the country. With this record, Genesis broke all previous records in which 3051 drones were used. This record was in the name of Shenzhen Damoda Intelligent Control Technology, which named this record in the month of September last year.

On this achievement, Marcus Hein, CEO of Genesis Motor China said that, we wanted to make it special and it was everything for the car buying customers of this country. Genesis is known for its fearless self-confidence and always does something different. With this record, we have brought the story of our brand to the consumers of China. In such a situation, we are going to offer our products in front of these customers soon.

After this event, there are many big brands in the Chinese market in front of Genesis, with which it will compete. Luxury cars dominate in China. But Genesis hopes that it can do something amazing in this market thanks to its new cars.

11/02/2021
Washington: America's President Joe Biden has announced a series of sanctions against military leaders in Myanmar in the wake of the coup. "Today I...

05/08/2020
Pune: Former Maharashtra Chief Minister Shivajirao Patil Nilangekar died here on Wednesday due to illness. He was 89. Sources in his family said that...

07/03/2021
New Delhi: The Income Tax Department raided the locations of 2 big jewelers of Tamil Nadu. One of them is the leading bullion trader...