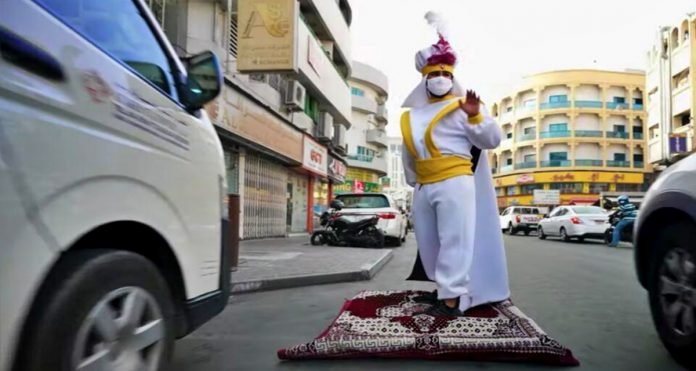 New Delhi: The story of Aladdin’s magic lamp and his magic mat are still famous today. Hearing the stories of the flying mat in the stories, one often thinks that it can really happen? But recently a video is becoming increasingly viral on social media (Aladdin Viral Video). In this video, a man is seen standing on the carpet and flying on the water and the road.

Actually, in this video, a man dressed up like Aladdin has reconstructed the story of the magic carpet heard in the stories. The man seen in the video is seen flying on the streets of Dubai. People were also surprised to see it flying. Many people can be seen taking photos and making videos of this person.

Let us tell you that, although the reality of this video is something else. It is not a flying carpet, but an electronic longboard is used to cover it with blackness, which is what appears to be a flying carpet.

It is being told that the person seen in the video is a YouTuber. She is famous on social media as RhyzOrDie. In the video, the man can be seen flying not only on the road but also over the water. These YouTubers create content based on the theme of Arabian Nights. In this episode, he recently shot and shared the video of Magic Carpet on social media.

19/10/2021/8:48:pm
New Delhi: After banning 250 Chinese apps last year, the central government is going to take another big step soon. According to the information...

After Bihar, UP, bats suddenly die in MP

26/08/2021/9:47:am
Mumbai: The Reserve Bank of India (RBI) on Wednesday included laptops, desktops, hand watches and Internet of Things (IOT) based products, etc. The purpose of...