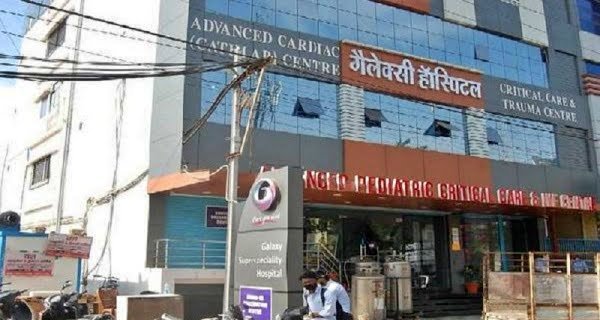 Jabalpur: As the number of people infected with the coronavirus increases, there is an outcry over oxygen in different parts of the country. Madhya Pradesh is also not untouched by this. In the Jabalpur district of Madhya Pradesh, there was a lot of ruckus on Friday morning. At the Galaxy Hospital (Ukhri) here, many patients died due to the depletion of oxygen. According to the information, 5 patients died due to the loss of oxygen. After this, there was a ruckus.

According to sources, the doctors and staff ran away from the hospital to see the ruckus growing. On the other hand, the police had to handle the front to control the commotion. Police reached the hospital with a cylinder on their own. Police of 4 police stations including CSP, TI surrounded the area.

Patients started suffering after the exhaustion of oxygen
According to the information, a total of 65 Covid infected are admitted to Galaxy Hospital. There were 31 oxygen and 34 ICU patients admitted. Surprisingly, backups were not kept in the hospital. In this whole case, there has been a lot of negligence of the hospital management. When the patients started to suffer after the oxygen was exhausted, the doctors had to be present for treatment, but they escaped leaving the patients with God in trust.
After the deaths, the families started committing uproar

After 5 deaths and the escape of the doctor staff, the family became angry. They started committing uproar. The family was informed about this by the police. A police team immediately left for the court. Police reached the hospital with oxygen cylinders from there. The family alleges that the hospital has failed to provide oxygen to the patients, due to which the patients have to die.

Black marketing of Remedisvir in the city, doctors also included
Significantly, in Jabalpur, the havoc of Corona is continuously increasing. Even under this circumstance, people are not giving up the use of compulsion. Black marketing of Remedesivir injection was caught here. But this time two doctors were also involved in it. A total of 5 people, including both doctors, have been arrested by the police. 4 injections were also recovered from them.

Remadecivir injection acts as a lifesaver for corona patients. It is in great demand in this era of the Corona epidemic. Kalabazaris are taking advantage of this and are selling an injection of eight hundred and fifty rupees for thousands of rupees. These accused, caught today, used to intercept the injections supplied to the patients and sell them in the market at arbitrary prices.

NSA on injection blackout
On the other hand, Rasuka (NSA) has been imposed on two accused who sell Remedisvir Injection Black. An order has been issued to lock both the accused in the Central Jail for six months. On Friday, the Omati Police will serve a notice to both the accused in the Central Jail. This is the first such action in MP. At the same time, after giving the mobile number of the patients to the hospitals, Remedesvir will administer the injection.

Will have to watch video tutorial, before new driving license

Digital voter card to be launched tomorrow on Voters Day, download as Aadhaar

24/01/2021
New Delhi: Voters Day will be celebrated on 25 January in the country. The preparations are at their peak. During this time, the Election...

Sapna Chaudhary’s fans are fanned, the video is going viral

01/10/2020
Mumbai: Sapna Choudhary, who became a Bollywood actress from Haryanvi Dancer, started her career with stage performance. Today, even after achieving so much fame,...

13/08/2020
Jaipur: After the crisis over the government ends, a meeting of the Congress Legislature Party has been called at the Chief Minister's residence on...