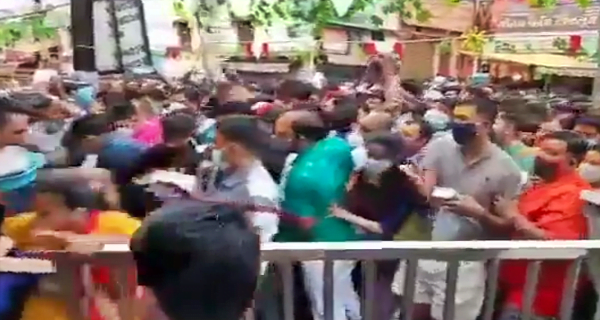 Ujjain: There was a crowd of devotees in the Mahakal Temple of Ujjain today. The system collapsed for some time in front of this crowd. During the entry at gate number four of the temple, there was a huge scuffle and the barricades fell in that hustle. Many children and women fell as soon as the barricade fell. A video of the incident has surfaced. There was a huge scuffle during the entry of the Mahakal temple at gate number 4. The video of the incident that has surfaced shows that there was a huge crowd of devotees. There were also a lot of children and women in it.

As the crowd grew, there was a scuffle. In this, neither the social distance was visible nor the corona protocol was seen to be followed. In the crowd of people, the barricade to enter the temple was broken and the women and children standing in the crowd fell down. People started climbing on top of them. But the alert guards posted at the temple and the entrance immediately took over the arrangements and nothing untoward was avoided.

The accident happened on this day 25 years ago
Exactly 25 years ago today, a big accident has happened in the Mahakal temple. On 26 July 1996, a stampede broke out among devotees who arrived in large numbers on the day of Somvati Amavasya, in which more than 35 people died. That was the biggest accident ever in the Mahakal temple. Today people’s lives were saved in time or else a big accident could have happened. Collector Ashish Singh said that from next time we will get social distancing to be followed. Suddenly a huge crowd had come together. I Will change plans next time. The Kovid guideline will be strictly followed.

Mahakal’s Sawari(ride)
Today, on the first Monday of Sawan, Baba Mahakal went on a city tour to know the condition of the devotees. Baba’s ride was taken out as per tradition. But this time due to Corona, devotees are not allowed to participate in it. This time the route of the ride has also been kept short. Devotees in the Mahakaleshwar temple have been an influx from early morning to see Baba. Devotees could not enter the sanctum sanctorum, but Nandi could worship from the barricade at the gate of the hall. Hundreds of devotees started gathering outside the temple from Sunday night itself. Devotees were given entry from 5 am. The doors of the temple were opened at 2:30 am. First of all, all the Pandey priests offered water. After that Panchamrit Abhishek was done with milk, ghee, honey, sugar, and curd. After the Abhishek, Baba was adorned with cannabis and burnt to ashes.

Effect of corona
There is a corona period, so there is a ban on the entry of devotees in Bhasma-Shayan aarti. Hence Ganesh Mandap, Nandi Hall, Karthik Hall appeared empty at the time of Aarti. The process of darshan in the temple started at 5 in the morning. Devotees entered gate number 4 by showing the vaccine certificate at the entrance. Due to Corona, only three and a half thousand devotees were being allowed to enter the temple on the first day. Now, this number has been increased due to Sawan. That too after online registration or paying a heavy fee.

China’s statement from Quad conference said – Hopefully, it will be beneficial for...

10/03/2021/8:53:pm
Beijing: Leaders of America, India, Australia, and Japan will hold talks at the first quad conference on Friday, and meanwhile China on Wednesday hoped...

29/09/2020/8:21:pm
Patna: The Election Commission has announced the methods of assembly elections. After which all political parties have started their preparations. Cracks have started appearing...

31/05/2021/10:12:am
Providence: More states and cities are loosening restrictions in the United States as the number of Coronavirus cases declines and people taking anti-infection vaccine...

21/03/2021/11:23:am
New Delhi: Samsung announced that its Galaxy M12 smartphone has become the top-ranked smartphone in Amazon's bestselling list on the very first day in...

Corona speed up in Maharashtra and Kerala, Center instructs both states

16/02/2021/10:07:pm
New Delhi: In view of the increasing case of corona in Maharashtra and Kerala, the central government has given advice to both states. Explain...