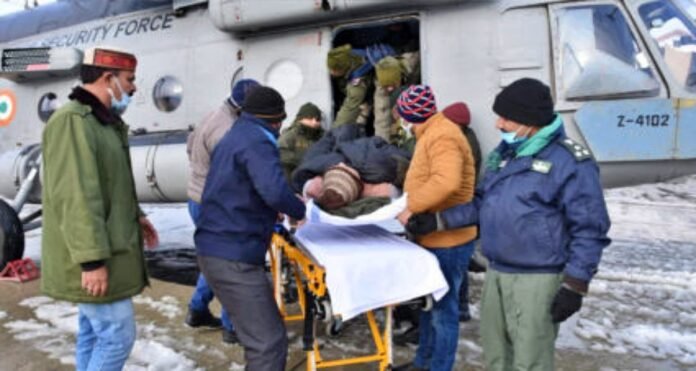 Srinagar: Heavy snowfall is occurring in Jammu and Kashmir. Due to this, the traffic has come to a standstill. Meanwhile, the Border Security Force (BSF) Kashmir on Sunday airlifted four patients, including a BSF jawan, two women, and a child. All of them have been airlifted from the snow-clad Tangdhar sector in district headquarters Kupwara for treatment. BSF has given this information.

BSF tweeted on its official Twitter account and said, “Today BSF Kashmir evacuated three patients in an emergency from Snow Bond area, Tangdhar LoC. The patients included an elderly woman and a child. Humanity has always been the top priority of BSF and helps people from remote places in every adversity.”

Let us inform you that there was heavy snowfall in Kashmir due to which the roads have been closed. People are facing lot of problems. In such a situation, BSF airlifted three civilian patients, including an old woman and a child, for emergency medical treatment from the snowy area of ​​Tangdhar in Kashmir.

26/01/2021/11:17:am
Washington: Corona Pandemic, one of the most affected countries, has now reached the highly contagious form of Covid-19 New Strain found in Brazil. After...

This Summer Get Wi-Fi Enabled AC from Hitachi Cooling and Heating, India

08/04/2022/9:39:am
New Delhi, Delhi, India:  Smartphones have revolutionized lives over the last decade. Besides communication, millions of Indians use them for a host of everyday tasks....

Britain tells its citizens to stay away from Kabul airport, fears of terrorist attack

26/08/2021/9:57:am
London: The UK government has asked its citizens in Afghanistan to stay away from the airport, expressing the possibility of a terrorist attack on...

22/06/2021/9:58:am
Tehran: Iran's newly elected President Ibrahim Raisi has once again bluntly responded to America on the Ballistic Missile Program. Raisi has said he does...

27/10/2020/9:32:pm
New Delhi: The Election Commission (EC) on Tuesday issued a notice to BJP leader Imrati Devi, who is contesting the by-elections in Madhya Pradesh,...