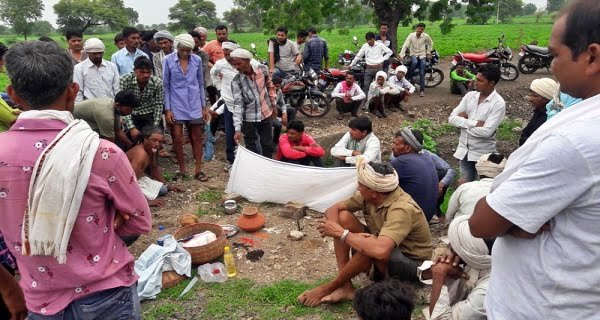 Dahi: The place where a person died in a road accident, more than 100 people from Alirajpur district reached 40 km away in Dhar district to collect his soul. Worship was performed at the accident site for one hour in the presence of the village’s Barwa (knowledge of Tantric activities). Now on Monday, the funeral ceremony will be performed in the village of this dead person.

The view was on Saturday of the main roadside situated between village Padiyal and Susari of the area. Here more than 100 men and women were reciting worship for a long time. Haresingh and Motesingh, who were in the crowd, said that they have come to collect the soul of the dead person. According to the belief, the place where the soul of the dead person had emerged due to worship and other rituals will not wander here and he will get peace. The soul will reach the house of the dead person. Then two days later on Monday, the funeral ceremony will be held.

Haresingh told that ten days ago, the bike rider Gemma son Dakhan Singh had died here due to a tractor collision. He was a resident of village Kuklat (Alirajpur district), 40 km away. The accident happened when he was going to Kukshi bypassing the curd from the kuklat. Now some people of the village, relatives, and relatives have come to the spot to take his life.

In fact, in the tribal areas of Dhar, Alirajpur, and Jhabua districts, the tradition of performing such a unique and unique ritual is going on till now. Under this, the place where a person dies due to famine and untimely death, there is a belief among the tribals that his soul gets peace at that place, so worship is done there. This is called taking a living being.

03/09/2020/10:46:am
New Delhi: A few days after thwarting China's "provocative action" to change the situation in eastern Ladakh, India has strengthened its presence on at...

Central Government will give 4.35 lakh vials of Remdesivir to Maharashtra

We don’t want another Cold War that will divide world: US President Joe Biden

21/09/2021/10:41:pm
United Nations: US President Joe Biden said on Tuesday that those who promote terrorism against his country will find America as an arch enemy....