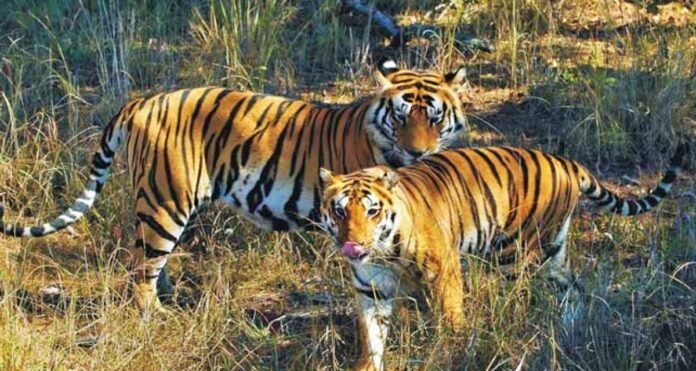 Bhopal: There is every possibility of an increase in the number of tigers in Madhya Pradesh, but without developing the corridor, it will be difficult to handle the increasing population of tigers. Forest officials believe that the current capacity of keeping tigers in the state is seven hundred. This figure is likely to be exceeded in the current tiger census. In such a situation, it has become necessary to develop the corridor. Otherwise, in the coming times, fights between tigers will increase, they will come out of the forests and the death graph will also increase. At present, there is not a single such corridor in the state, which connects one protected area to another without human intervention. This is the reason that the death graph of tigers in the state is also the highest in the country. 46 tigers have died in the last year.

According to the tiger estimate of the year 2018, there are 526 tigers in the state. This figure is the highest in the country, which is expected to cross seven-hundred in this year’s census. This situation is fine in terms of the pride and tourism of Madhya Pradesh, but it cannot be said to be better in terms of tigers. Because the tiger holding capacity of the state has not increased in the last years. Corridor development is being talked about for a long time but till now no positive efforts have been seen. This is the reason why tigers are visible outside the forests.

The first phase of tiger assessment completed
The first phase of the tiger census has been completed in the state. In this phase, forest workers have collected evidence of tiger presence (scratches on trees, traces of excrement, traces of grass, and footprints). The second phase has started in a dozen districts of the state. In which trap cameras are installed in the forest.

13/08/2020/10:16:am
Beijing: In the annual diplomatic talks between China and Nepal, a senior Chinese diplomat said on Wednesday that China and Nepal should strongly support...

Postmen retire, who climbed 15 km mountain every day for 30...

Bhopal software engineer shot dead in US, family not allowed to...

No avenging the defeat of the father, the election is fighting...