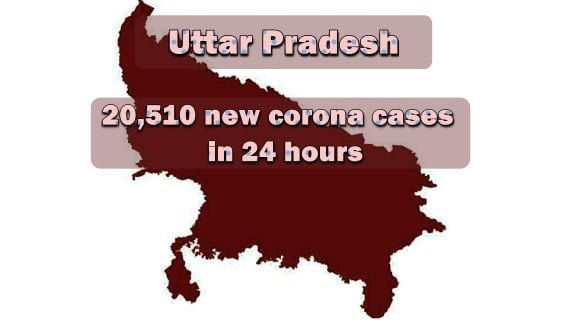 Lucknow: In Uttar Pradesh, once again, Corona is spreading its legs. Things are now looking worse from bad to worse. Talking about the last 24 hours, there have been 20,510 new corona infected cases in the state. At the same time, the total cases have become 1,11,835 of the total cases. Additional Chief Secretary of Health Department Amit Mohan Prasad informed that while the cases have increased in the last 24 hours, 4517 people have also defeated the corona infection.

In view of the increasing cases of corona, the Allahabad High Court on Tuesday directed the state government to consider imposing a full lockdown for two or three weeks in the cities most affected by corona infection. The court said that no person should be shown without a mask on the road, otherwise the court will take contempt proceedings against the police. The court has said that not more than 50 people should gather in social religious events. The next hearing on the petition will be held on April 19.

At the same time, Samajwadi Party chief Akhilesh Yadav and state Chief Minister Yogi Adityanath have also been found to be corona infected. The Chief Minister is currently in home isolation and has appealed to the people who come in contact with him to get the investigation done. The Chief Minister gave this information by tweeting from his official Twitter handle. Earlier, the report of Yogi government minister Ashutosh Tandon has also come positive.
The chief minister tweeted and wrote, “After the initial signs of corona appear, I have a Covid test and my report is positive. I am in self-isolation and fully following the consultation of the doctors. I am editing all work virtually. All the activities of the state government are going on normally. Meanwhile, those who have come in contact with me must get their investigation done and take precautions. “

Virat Kohli can make a special record, so far no Indian could do this

05/04/2021
New Delhi: Virat Kohli has made several batting records to his name. They can set a special record in the current season of IPL...

09/04/2021
Washington: US President Joe Biden announced a series of official actions to tackle the problem of gun violence in the US by organizing a...

25/10/2020
New Delhi: Well-known auto company Tata Motors on Saturday said that its Passenger Vehicle Vertical has crossed the figure of 40 lakhs in terms...