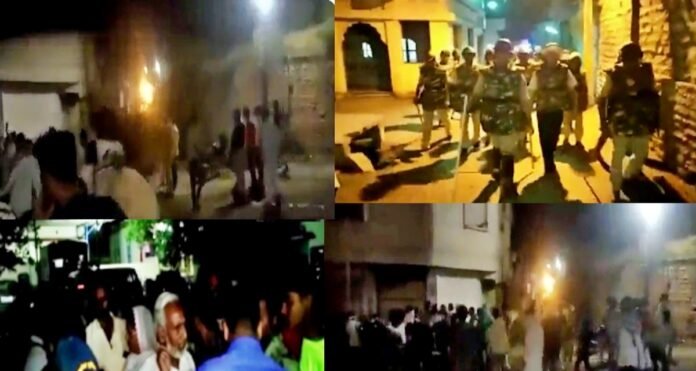 Neemuch: Two sides clashed in Neemuch, Madhya Pradesh. According to the information received, some people had placed an idol of Lord Hanuman near a dargah. This led to a clash between two groups in the old Kachari area. During the clash, some people pelted stones in which 3-4 vehicles were damaged, but no one was injured. Neemuch MP said that an adequate police force has been deployed in the area. At present, the government has imposed Section 144 in the Neemuch area.

A dispute broke out between two communities over the installation of an idol of Lord Hanuman on the land near the dargah in the Purani Kachari area of ​​Neemuch city of Madhya Pradesh on Monday night. During this, there was an atmosphere of chaos in the area for some time. Both the sides came face to face and stone-pelting took place. A large number of police forces were deployed here to bring the situation under control. The police fired tear gas shells and used sticks to disperse the crowd. Neemuch SP Suraj Verma says that the administration has imposed Section 144 in the Neemuch City area in view of the situation.

Know what is the whole matter
According to the information received, there is a land of Dagrah in the old court area of ​​Neemuch. On Monday evening, some people were trying to establish an idol of Hanumanji on this land. During this, some people present in Dagrah objected to it. Soon a dispute started between the two sides. The disagreement escalated late at night. Suddenly stone pelting started. During this, some people also set fire to the car.

To calm the dispute, the police also gave advice to both of them. He also called the police control room. Meanwhile, stone pelting started in the area. On getting information about the incident, the police team reached the spot. The police used tear gas shells to bring the situation under control. The police also used sticks to control the crowd.

07/03/2021/10:09:pm
Oregon: Every day new concerns about Coronavirus are coming out. Recently, a new type of virus found in Britain in Oregon has been found...

Terror of tornado, Zeeland of Netherlands was devastated; watch video

06/10/2021/8:31:pm
Stockholm: Two scientists were awarded the Nobel Prize in Chemistry Wednesday for discovering a "simple" new method of molecular construction. This new way of...

‘Mother’s milk’ prepared in the lab for the first time, will be sold soon...

Women prisoners will get bangles and bindi in MP, video call...