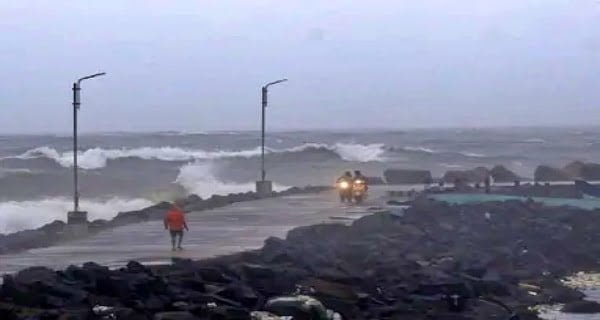 Bengaluru: Hurricane Tauktae is wreaking havoc around the coastal and Malnad districts of Karnataka. Officials said on Sunday that four people have died due to the cyclone in the state so far. As per the status report released by Karnataka State Disaster Management Authority officials on Sunday morning, 73 villages and 17 taluks in Dakshina Kannada, Udupi, Uttara Kannada, Kodagu, Shivamogga, Chikkamagaluru, and Hassan districts have so far been affected by the cyclone.

In the seventy-three affected villages, 28 villages are from the Udupi district. Officials said one person died in Uttar Kannada, Udupi, Chikkamagaluru, and Shivamogga districts. According to the status report, 318 people have been rescued so far and 298 people have been kept in 11 relief camps. It was reported that 112 houses, 139 poles, 22 transformers, four hectares of plantation have been damaged. Chief Minister BS Yeddyurappa on Sunday directed the district in-charge ministers and the deputy commissioner to visit the affected districts and start rescue and relief work.

The chief minister’s office said in a statement that Yeddyurappa spoke to the ministers and deputy commissioners in charge of the coastal districts on Sunday and took stock of the situation. Said to The Chief Minister directed the officers to call the Ministers concerned or in case of any emergency help from the State Government. According to the Karnataka Disaster Management Authority, there has been heavy rainfall at night mainly in the coastal and Malnad districts. According to the statement, heavy rains have occurred in eight districts.

It was reported that the coastal areas of Karnataka received heavy rains with the wind blowing at a speed of 70 to 80 km per hour. The India Meteorological Department (IMD) has warned of light to moderate rainfall in most areas. However, IMD said that there may be heavy rains in different parts of coastal and adjoining ghat districts on Sunday in the state.

Apple became the first American company to have a valuation of two thousand billion...

20/08/2020/11:24:am
New York: Luxury smartphone maker Apple has become the first American company in the market share of two thousand billion dollars. Apple was the...

20/08/2020/7:54:pm
MUMBAI: After the death of actor Sushant Singh Rajput, the debate about nepotism in Bollywood has started. Kangana Ranaut has targeted Star Kids after...