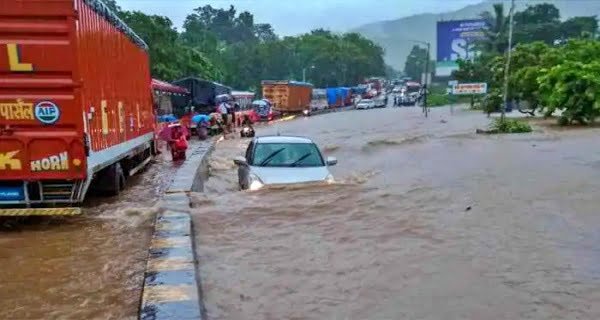 Mumbai: Due to heavy rain overnight in the metropolis, 30 people died in incidents of house collapse. Along with this, local train services and traffic are also affected due to waterlogging due to torrential rains in the financial capital. Meanwhile, Chief Minister Uddhav Thackeray spoke to Mumbai Municipal Commissioner IS Chahal and took stock of the rescue and relief operations. He directed the officials to ensure better coordination between the National Disaster Response Force (NDRF), municipal personnel, fire brigade, and police personnel for rescue operations. In view of the rain situation, Thackeray has also called a meeting at 6 pm.

The Western Railway and Central Railway have temporarily suspended suburban train services in Mumbai due to heavy rains and many long-distance trains have either been diverted or operated from other stations, officials said. Used to be. A fire brigade official said that 17 people died after a compound wall collapsed in a landslide triggered by heavy rains in a mountainous area. The wall of a house adjacent to it collapsed after a tree fell at around 1 am at Vashi Naka in the Mahul area of ​​Mumbai, the official said. Seven people were injured in the incident, who have been admitted to the nearby Rajawadi Hospital.

Seven people died due to the collapse of six kutcha houses
Seven people were killed and two were injured when six kutcha houses collapsed due to a landslide in Mumbai’s Vikhroli suburb at around 2.30 pm due to heavy rains, he said. The injured have been admitted to a nearby hospital. At the same time, a 16-year-old boy died when the wall of the forest department complex collapsed in suburban Bhandup.

Local train services suspended
Railway officials said that the suburban train services of the Central Railway and Western Railway were suspended in the financial capital due to waterlogging on the tracks due to heavy rains overnight. He said the service was restored in the morning. This rain reminded me of 944 mm of rainfall in 24 hours on July 26, 2005. An official of the Brihanmumbai Municipal Corporation (BMC) said that the India Meteorological Department (IMD) has issued a red alert for Mumbai in the background of heavy rains.

Train services between CSMT and Thane on the mainline were suspended due to waterlogging on tracks at Dadar, Parel, Matunga, Kurla, Sion, Bhandup, and other places, Central Railway said. Its chief spokesperson Shivaji Sutar said, “Services from CSMT to Vashi including Bandra/Goregaon suburban services are also suspended.” Several long-distance trains of Central Railway and Western Railway were affected due to waterlogging on the tracks. Before the pandemic, more than 3,000 suburban train services – both Central Railway and Western Railway – were used by over 75 lakh passengers daily. During the pandemic, suburban train services are restricted to emergency services employees and government employees.

27/09/2020/10:43:pm
New Delhi: President Ramnath Kovind has given his approval to the agricultural bills passed by Parliament recently. On Sunday, the President signed his three...

Sonu Sood gets a salute from the airlines, photo on SpiceJet

21/03/2021/10:35:am
During the lockdown, Bollywood actor Sonu Sood has been consistently seen helping the poor people to become the messiah. The actor has been seen...

Remdesivir, hydroxychloroquine, lopinavir/ritonavir, and interferon regimens appeared to have little or no effect for...