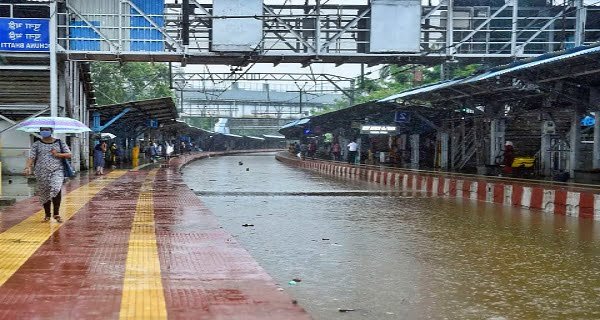 Mumbai: The southwest monsoon knocked in Mumbai and its surrounding areas on Wednesday. On the very first day of the monsoon in Mumbai, heavy rain caused water-logging at many places, affecting normal life and disrupting road traffic as well as local train services. Meanwhile, the Indian Meteorological Department (IMD) has issued a red alert for Mumbai and neighboring Thane, Palghar, and Raigad districts, warning of very heavy rain at some places. In view of the warning, NDRF teams have also been deployed at many places.

Heavy rain warning, NDRF teams deployed
According to NDRF, apart from Mumbai, about 15 teams have been deployed. NDRF teams have been deployed in Mumbai, Raigad, Thane, Palghar, Ratnagiri, and Sindhudurg districts. Let us tell you that the Indian Meteorological Department (IMD) has issued a red alert for Mumbai and neighboring districts like Thane, Palghar, and Raigad, warning of very heavy rain at some places. In view of the India Meteorological Department’s warning of heavy to very heavy rain in the Konkan region between June 11 and June 15, the state government on Wednesday requested the NDRF to send teams to five coastal districts. Palghar District Magistrate Manik Gursal said in official communication with the NDRF that the authority has requested to deploy four teams of NDRF in the Ratnagiri district and two teams each in other districts.

164.8 mm of rain recorded in six hours
According to the IMD, western suburb, Santa Cruz recorded 164.8 mm of rain in the six hours from 8.30 am to 2.30 pm, while Colaba in south Mumbai recorded 32.2 mm of rain during this period. According to a report, IMD’s Mumbai office head Dr Jayant Sarkar said in the morning, “Today the monsoon reached Mumbai.” The IMD said that conditions are favorable for monsoon over the remaining parts of Maharashtra in the next two to three days.

4-story building collapsed in Malad – 11 people died
A traumatic incident took place in Malad, Mumbai late at night amidst the rain that has been raining in Mumbai since Wednesday morning. A four-story building in Malad’s Malvani area suddenly collapsed. 11 people have died in this accident. While many people have been injured. Relief work is going on continuously on the spot. Residential buildings collapsed in Malad’s New Collector’s Compound around 11 pm last night. Additional CP Dilip Sawant said on the whole matter that 18 people have been rescued since last night. 11 people have died and 7 people are injured. Police will investigate the incident thoroughly and legal action will be taken.

Chief Minister Uddhav Thackeray gave instructions to the administration – ‘the residents should not be inconvenienced’
Maharashtra Chief Minister Uddhav Thackeray has directed the administration to ensure that the water accumulated due to rain is removed at the earliest and transport system is restored. Chief Minister Thackeray interacted with the district magistrates of Thane, Raigad, Ratnagiri, Sindhudurg and Palghar, besides Mumbai’s control rooms. Normal life has been affected in many areas due to incessant rains. The Chief Minister’s Office (CMO) said that the Meteorological Department has predicted moderate to very heavy rains in the next three days. The CMO said that the Chief Minister has asked the officials to ensure that the residents of the coastal region are not inconvenienced and where necessary, relief operations are initiated.

BMC’s pole opened in the first rain itself, Mumbai became water-water
Maharashtra BJP leader Ashish Shelar has hit out at the Brihanmumbai Municipal Corporation (BMC) for water-logging at various places in Mumbai due to heavy rains and said that the claim of completing the cleaning work before monsoon has been exposed. . He alleged that in the last five years, there were widespread irregularities in the cleaning of drains, sewers and open drains of Mumbai. Shelar said that the Shiv Sena-ruled BMC’s claim that 100 percent of work of cleaning drains, sewers, and open drains was completed before monsoon, as many places were waterlogged after heavy rains in the city. . The former minister said that Rs 150 crore is allocated every year for cleaning drains, sewers and open drains in the city. He alleged that with the connivance of the contractors, the ruling party, and the officials, a loot of one thousand crore rupees has happened in the last five years.

What is that martial art of Japan, whose expertise is Rahul Gandhi?

23/03/2021/9:47:pm
New Delhi: Leader of the Opposition Rahul Gandhi in Kerala is currently campaigning in connection with the elections in Kerala. During this time, he...

Petition filed for the removal of Shahi Idgah by Sri Krishna Virajman in...

30/09/2020/10:07:pm
Mathura (Uttar Pradesh): The petition filed in the court of Mathura for the removal of Shahi Idgah, situated in the premises of Shri Krishna's...

19/03/2021/10:30:am
Jaipur: 4 officers from other services have become IAS amidst opposition from RAS Association. The Union Ministry of Personnel and Training has issued its...

America will deliver weapons anywhere in the world in just 1 hour, new transport...

12/10/2020/10:22:pm
Washington: To deal with the growing threat from China, the US has announced to increase its military strength. After recently declaring Battle Force 2045...