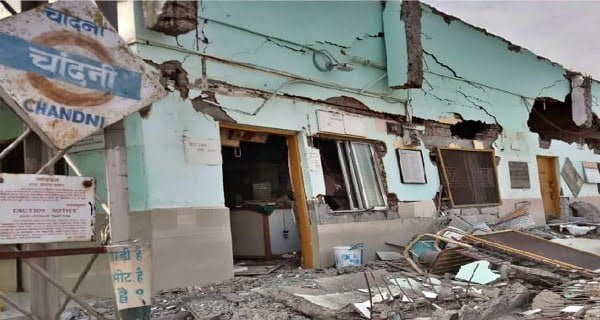 Burhanpur: A strange incident occurred in Burhanpur, Madhya Pradesh on Wednesday. Due to the speed of the train, it vibrated and the railway station building collapsed in full swing. Thankfully, there was no one in the station building at that time. With this incident, others are also shocked.

According to the information, the incident took place between Nepanagar to Asirgarh. From here Pushpak Express passed at a speed of 110 km per hour. As the train crossed the Chandni railway station building situated in the forest at around 4 pm, it could not bear its vibration. The front part of the building collapsed.

The vibration was so strong
The vibration was so strong that the glass of the windows of the station superintendent burst. The boards broke down and fell down. The debris was shattered on the platform. ASM Pradeep Kumar Pawar, who was posted on the spot, came out to flag the train. Seeing the building fall away. He informed this from Bhusaval to ADRM Manoj Sinha, Khandwa ADN Ajay Singh, Senior DN Rajesh Chikale.

All the officers reached the spot and inquired about the developments. RPF and GRP of Bhusaval, Khandwa, Burhanpur have been deployed at the scene. The Pushpak Express stood for 1 hour during the event. Apart from this, other vehicles were affected for about 30 minutes. At this time all the trains of up and down are being removed by giving an authority letter.

24/09/2020/9:59:pm
New Delhi: American company Harley Davidson has announced the closure of manufacturing and sales operations in India on Thursday. The company has taken this...

30/06/2020/10:36:pm
Washington: Democratic Party candidate Joe Biden has nominated Indian-American Medha Raj as his digital chief of staff for the presidential election in the US....