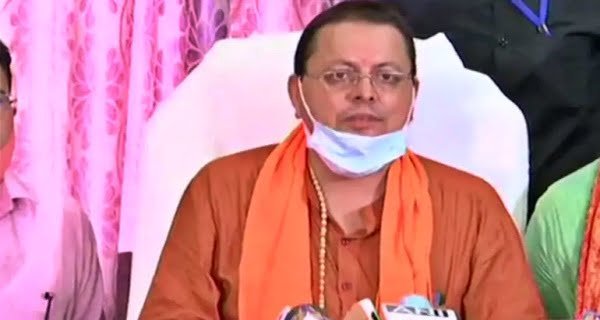 New Delhi: BJP has chosen a young Thakur face in the form of Pushkar Singh Dhami from the Kumaon region as the Chief Minister of Uttarakhand. Earlier, he had given the last two CMs from Garhwal. Dhami could be a surprising choice for the post after the resignation of Tirath Singh Rawat. Dhami, who was a two-time MLA from Khatima assembly seat, was neither a minister in the Trivendra Singh Rawat nor Tirath Singh Rawat government. Dhami’s selection balances regional and caste representation within the party in Uttarakhand as Madan Kaushik, a Brahmin leader from Garhwal, is the party chief.

Dhami described himself as a soldier’s son and ordinary party worker
Dhami, in his first remarks after his name was announced, insisted that he was a simple party worker, the son of a soldier, and was born in the border area of ​​Pithoragarh. Uttarakhand is a border state which is known for sending youth to the armed forces. He will take oath as CM on Sunday i.e. tomorrow at 5 pm. The BJP has placed its bet on 45-year-old Dhami, believing he can appeal to young voters as he has served as the chief of the BJP Yuva Morcha in the state.

Youngest chief minister
In the 2017 assembly elections, the BJP had won 57 out of 70 seats in the state. The party had won 23 out of 29 seats in Kumaon. This is the area from where the state’s senior Congress leaders come, including former CM Harish Singh Rawat, against whom the BJP is pitting Dhami as the state’s youngest-ever chief minister. Another top Congress leader from Kumaon was Indira Hridayesh, who passed away last month.

Sees election as an opportunity
Dhami is a dependent of former Uttarakhand CM Bhagat Singh Koshyari. Koshyari is also from Bageshwar in Kumaon and both of them have close links with the RSS. Koshyari is currently the Governor of Maharashtra. The BJP is currently facing a tough challenge in Uttarakhand, as its third chief minister in the last four years will head the 2022 assembly elections. According to Dhami, he sees this election as an opportunity to bring the party back to power.

Asked to wear a mask in the US, the two sisters stabbed the security...

14/07/2020/10:25:pm
New Delhi: The Health and Family Welfare Ministry has said that the difference between the active cases and the recovered cases is increasing progressively...