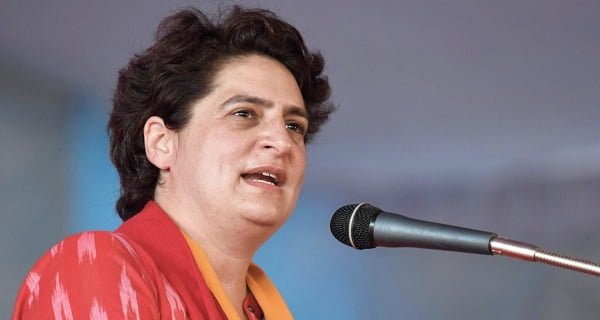 Lucknow: Where on the one hand, before the assembly elections in Uttar Pradesh, all the big and small political parties have started making strategies. Meanwhile, Priyanka Gandhi has made a big announcement by holding a press conference in Lucknow today. Yes, Priyanka Gandhi has announced in her press conference today that the party will give tickets to 40% women in the upcoming elections.

In this regard, Priyanka Gandhi said today, “The Congress has taken this decision for the daughter of Hathras. Today our party has taken this decision for the daughter of Unnao and for the girls living in Dalit Basti in Lucknow.” With this, Congress has given the slogan of ‘Girl hoon… I can fight’ with this. At the same time, on the question of giving tickets to the wife and daughter of politicians, Priyanka said that those who are good candidates will definitely get tickets.

Earlier today in the press conference, Congress Campaign Committee President PL Punia said that Congress very rarely announces the name of its candidate for the post of Chief Minister and by not announcing it yet, there is no major impact on the party’s prospects. Will not be affected as he has a big personality like Priyanka Gandhi to take charge of the campaign against BJP.

At the same time, PL Punia also said that Priyanka Gandhi is the face of the party in Uttar Pradesh and all of us will fight this election under her leadership. Punia also claimed that there is a direct contest between the Congress and the BJP in the Uttar Pradesh elections as both the Samajwadi Party and the Bahujan Samaj Party have lagged behind and are no longer in the contest.

Significantly, this time the Congress has decided not to form an alliance with any party. At the same time, the party has also called for separate applications of potential candidates from all the seats. There are also speculations that the first list of Congress candidates may be released soon.

20/02/2021/4:09:pm
New Delhi: Indian Railways has successfully completed the trial run of an electric locomotive in the northeastern state of Assam for the first time....

Violence in JNU: Violent clash between ABVP and Left alliance, many students injured

15/11/2021/10:13:am
New Delhi: Violence erupted once again between student organizations in the country's prestigious Jawaharlal Nehru University (JNU) located in the national capital Delhi. It...

Dr.Anthony Fauchi claims-3 doses of vaccine will be needed against the virus

04/09/2021/9:22:pm
Washington: At present, usually two doses of Corona Vaccine are being administered around the world. In some countries including America, three doses of the...