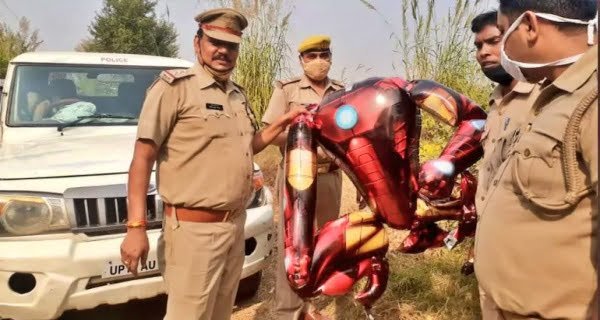 Noida (Uttar Pradesh): In Greater Noida, Uttar Pradesh, the locals got nervous on Saturday seeing a strange thing flying in the sky. However, it was later discovered that the object was an ‘Iron Man’ shaped balloon. Officials said that people saw this object in the sky in Dankour area in the morning, which later fell into a canal near Bhatta Parsaul village.

A crowd of people gathered around it and some people felt that this object was “some alien (creature of another planet)”. Anil Kumar Pandey, in-charge of Dankaur police station, told PTI that it was a balloon filled with air which later got stuck in bushes near the canal. He said, “A portion of the balloon was touching the flowing water of the canal, causing the balloon to move slightly.” He said that because of this some people were finding this object strange. Pandey said that there was nothing harmful in the balloon, but it is not yet known who flew the balloon.

Schools will open from tomorrow in MP, separate gates for the movement of students, know what are the rules

17/11/2020/10:04:pm
Washington: The Pentagon has taken the first step to develop a system to defend the country from the attack of intercontinental ballistic missiles (ICBM)....