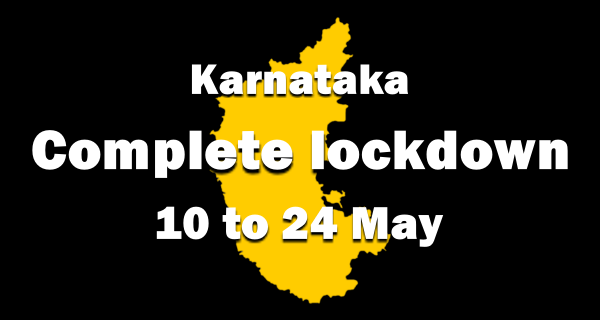 Bengaluru: After Rajasthan, in view of the ever-increasing cases of corona in Karnataka, the state government has announced a complete lockdown. Announcing this, Karnataka Chief Minister BS Yeddyurappa said that there will be a complete lockdown in the state from 10 to 24 May. During this period, only mandatory services will be exempted. In Rajasthan too, a full lockdown has been imposed from May 10-24.

Yeddyurappa, after meeting with state officials on Friday, said that the curfew was imposed in view of the growing Corona cases in the state, though it was not successful. Due to which the state government has decided to impose complete lockdown from 6 am on May 10 to May 24 morning. He said that during the complete lockdown, restaurants, meat and vegetable shops will be open from 6 am to 10 am in the state.

It will not be allowed to go out after 10 o’clock in the morning
BS Yeddyurappa said that in view of the increasing number of deaths due to infection in the state, it has been decided to impose a complete lockdown. During this time, no person will be allowed to roam on the street or come out of the house after 10 o’clock in the morning. During the complete lockdown, strict instructions have been given to the state government to ensure that all the rules are followed properly.

Corona is becoming uncontrolled in Karnataka
After Maharashtra, Karnataka is the second state in the country where up to 50 thousand new corona infections are coming in a day. On Thursday, 49,058 new cases of Coronavirus infection were reported in Karnataka and with this the number of people infected so far has increased to 17,90,104. The health department said that after the death of 328 patients of Covid-19 in the last 24 hours, the number of people who lost their lives due to this infection in the state increased to 17,212. In the Bangalore urban area itself, 23,706 new cases of infection were reported, while 139 patients died.

21/02/2021/10:39:am
Islamabad: The Meteorological Department of Pakistan has warned that the drought conditions in Sindh and Baluchistan parts may worsen, due to which water in...

19/08/2020/9:48:pm
Officials in Mauritius have arrested the Indian captain of a Japanese vessel (Japanese Vessel) that was trapped in shallow waters near Mauritius and recovered...

11/03/2021/8:27:pm
Washington: Influential Senators from the United States have made several proposals in the Senate, criticizing China (China) for increasing military activities in the South...