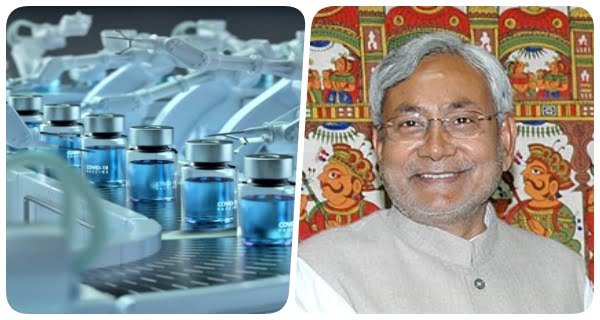 Patna: A war-level vaccination campaign is on to eradicate Corona. After health workers and frontline workers, it is the turn of ordinary people to take the vaccine from today. In such a situation, Bihar’s Nitish Kumar government has fulfilled its big election promise that it has decided that free Corona Vaccine vaccines will be given in all government and private hospitals.

Bihar CM Nitish Kumar, after meeting with the officials of the health department has announced that vaccination will be done only on the basis of the decision taken in the cabinet meeting in which people will not have to pay any fee. According to the central government, according to the central government, a fee of Rs 250 will have to be paid for vaccination in private hospitals, but in Bihar, the state government will pay for the vaccination fee, but not by the people themselves.

Norms have been set for the third phase vaccination, in which only those who are suffering from hyper tension, cancer, diabetes, heart problems, those above 60 years and sick people above 45 years will be given vaccinations. There will also be verification of those taking the vaccine. It will be mandatory to bring people with co-morbidities with a medical certificate at the vaccination center. The government has released a list of 12 types of identity cards as well as the Aadhaar card has been made mandatory.

China: Now beggars do not ask for money here, they make big money with...

11/04/2021
New Delhi: While on one hand, China is claiming that poverty is completely eradicated, on the other hand, beggars are becoming more modern now....

18/03/2021
New Delhi: The second wave of Coronavirus is spreading rapidly in the country. Due to the increasing outbreak of Corona, many states have imposed...

20/11/2020
Washington: President Donald Trump and his allies are increasingly taking unfair steps to reverse the 2020 election results, with state representatives trying to nullify...

The Hindu organization of America raised a fund of one lakh dollars to give...

24/11/2020
Houston: A non-profit Hindu organization in the United States has raised 1 million to provide scholarships to low-income youth living here for professional...