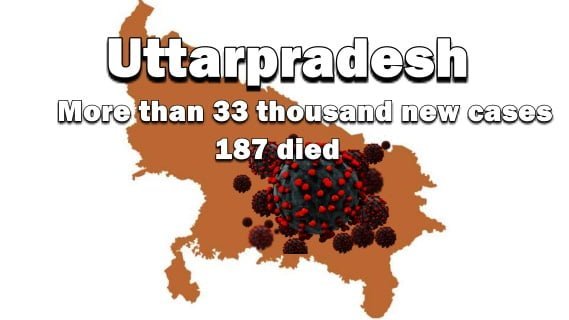 Lucknow: Coronavirus is becoming uncontrollable in Uttar Pradesh. Because of this, the situation is getting serious. According to the data released by the Health Department on Wednesday, for the first time in the state, 33,214 new cases were detected in a single day. At the same time, 187 people have died. This is the first time that so many cases have occurred in a day.

Additional Health Secretary of the state Mohan Prasad informed that the number of corona infected in the state has increased to 9,42,511. At the same time, the number of people recovering from this epidemic has reached 6,89,900. In which 14,198 people have recovered today.

Things are worsening in the capital Lucknow
Corona in Lucknow has become a worrying situation. For the last two days, more than 5000 thousand cases are being reported. On Wednesday, 5,902 new patients have been received from the district, after which the number of infected has increased to 1,62,264. At the same time, 2269 people have also recovered. However, 21 people have also died.

05/01/2021
Washington: Indian-American Niraj Antani was sworn in as a US Senator from Ohio. With this, he became the first American of Indian origin to...