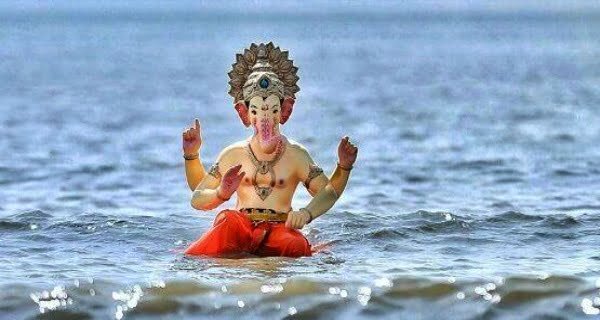 Mumbai: Where on one side today is the last day of Ganesh Utsav which has been going on for a few days. At the same time, on the important day of Ganesh Visarjan, Mumbai Police is now on high alert. Today, the security measures of the entire city have been tightened and tight-lipped before Ganesh Visarjan. At the same time, the police have now made all kinds of arrangements to avoid any untoward incident.

It is worth noting that after the incident of some suspected terrorists arrested recently, now the security system in the financial capital of the country has been increased even more. Let us inform you that only yesterday, the Anti-Terrorism Squad of Mumbai Police has also taken one more person in its custody in connection with the terrorist conspiracy caught and busted by the Delhi Police.

Today is the end of the Ganesh festival
It should be known that after ten days of Ganesh Chaturthi and Ganesh Utsav, today there will be a farewell of the beloved Ganpati Dev ‘Bappa’ of the public and his idol will also be immersed at various places today. On the other hand, with the immersion of the idol of Ganesh Dev, this 10-day-long beautiful and beautiful Ganesh festival will come to an end. Anyway, due to the Corona epidemic, this year also the color of the Ganesh festival did not accumulate like every year. In view of the threat of the spread of Corona, this time the procession in the farewell of Bappa has also been banned.

There will be tight security arrangements of the police in the whole city
On this issue on Saturday, Mumbai Police spokesperson and Deputy Commissioner S Chaitanya informed that this time also necessary security has been increased around important installations. Along with this, he also told that apart from the police patrolling in the sensitive area, there will be heavy deployment of police at the place of Ganesh immersion. On the other hand, Mumbai Police has already made arrangements for additional lighting, cranes, divers, ambulances, and fire engines to deal with any kind of emergency.

Along with this, in view of today’s security arrangements, three companies of State Reserve Police Force, one company of Central Reserve Police Force, 500 home guards, and 275 constables have also been deployed across the city. It is hoped that today this important occasion of Ganesh Visarjan day will end happily and with complete security.

After Mumbai, Chennai is also out of IPL 2022, know the condition of other...

13/05/2022/1:46:pm
New Delhi: Mumbai Indians defeated Chennai Super Kings by 5 wickets in a thrilling low-scoring match thanks to the brilliant performance of the bowlers....

Government banks initiative to give you better banking facility, new company to be formed

Government will provide cheaper options than gas for cooking, know what is the plan?

14/09/2020/10:58:am
New Delhi: Power Minister RK Singh said that the government is considering encouraging the use of electricity on a wider scale in cooking to...

Could not come to Bhopal due to the closure of trains...