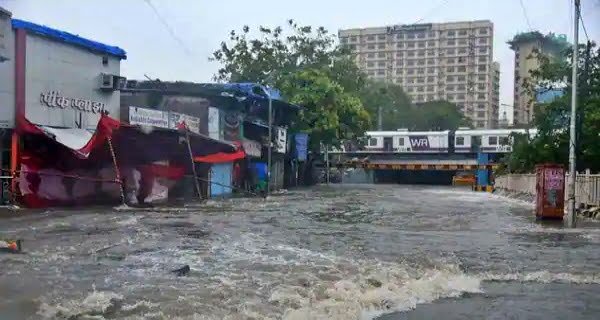 Mumbai: Where the monsoon has given the news of its arrival in Maharashtra. At the same time, since the onset of Southwest Monsoon in Mumbai, continuous rain continues there. Now due to this torrential rain, the Andheri subway has also been flooded.

Along with this, due to the dire situation of waterlogging due to heavy rains in many areas including Kurla, Santacruz, Andheri, the local people are facing a lot of problems as before. Yes, every year in Mumbai, monsoon rains become such a problem that the glittering city becomes completely chaotic within a few hours, it comes to a halt.

On the one hand, due to the slightest rain in Mumbai, the roads get waterlogged as well as water enters the houses due to this. At the same time, in every monsoon, Mumbaikars fight with this problem. Be aware that the Southwest Monsoon has made its first knock in Mumbai on Wednesday. Since then it has been raining continuously. Meanwhile, the Meteorological Department has also issued an alert of heavy rain on June 13-14.

A heavy rain alert issued
Now according to the Meteorological Department, there may be heavy rain in Mumbai and nearby areas. Now an alert has also been issued. Along with this, the Meteorological Department (IMD) has issued a ‘Red Alert’ of heavy rains for the coming June 13 in the Ratnagiri and Raigad districts of Maharashtra. According to IMD, some places in Mumbai and neighboring Thane may also receive heavy rains on the coming Saturday.

Along with this, the Regional Meteorological Department of IMD has said that Mumbai, Thane, Raigad, and Ratnagiri districts may receive very heavy rains on Sunday as well. Whereas in Raigad and Ratnagiri districts, a similar alert has been issued for today ie Saturday. If the Meteorological Department is to be believed, there may be more than 204.55 mm of rain within the next 24 hours. Which is also called the category of extremely heavy rain.

JEE Advanced date announced, now will be held in October

27/07/2021/9:34:am
New Delhi: Union Education Minister Dharmendra Pradhan on Monday announced that the Joint Entrance Examination (JEE)-Advanced will be conducted on October 3. Earlier, this...

31/03/2022/10:21:pm
London: A Russian billionaire's superyacht named 'Phi' was seized in London on Tuesday. This superyacht has been confiscated under British government sanctions over the...

01/07/2020/9:28:pm
New Delhi: India and China have emphasized the need for an expeditious, phased, and stepwise de-escalation as a priority along the Line of Actual...

SDRF-ITBP and Army put full force in Uttarakhand disaster, this is...

Shrimad Bhagwat Geeta will be included in syllabus of Himachal Board