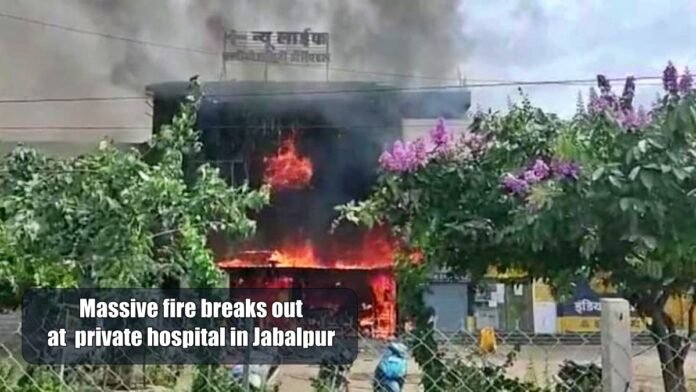 Bhopal: According to big news, a major fire broke out in a private hospital in Jabalpur, Madhya Pradesh. The fire broke out at New Life Multispecialty Hospital, Damoh Naka Shivnagar. The fire was terrible that it spread everywhere in an instant. According to the preliminary information received, so far 10 people have died and 23 others have been injured due to the fire. On receiving this information, the fire brigade reached the spot and the work of extinguishing the fire is going on. The work of evacuating the people present in the hospital is going on.

Chief Minister Shivraj Chauhan expressed grief
Meanwhile, Madhya Pradesh Chief Minister Shivraj Chouhan has condoled the incident. CM said sad news has been received about a horrific fire accident in a hospital in Jabalpur. I am in constant touch with the local administration and collector. The Chief Secretary has been directed to keep an eye on the entire matter. Every effort is being made for relief and rescue.

My heart is saddened by the news of the untimely demise of precious lives in the fire accident at New Life Hospital, Jabalpur. I pray to God to give peace to the departed souls and strength to the families to bear this deep loss and speedy recovery of the injured. , Peace.

Jabalpur CSP Akhilesh Gaur said that in this, four people died and three were seriously injured. It was a huge fire, and our teams rescued everyone trapped inside the hospital. Prima facie the reason for the fire could be a short circuit.

Government announced compensation
Madhya Pradesh Chief Minister Shivraj Singh Chouhan announced an ex-gratia of Rs 5 lakh each for the next of kin of 4 people who lost their lives in the Jabalpur hospital fire incident.

‘You give me blood, I will give you freedom’ story of infatuating Subhash...

09/04/2022/10:37:pm
Kyiv: British Prime Minister Boris Johnson met with Ukrainian President Volodymyr Zelensky during a visit to Kyiv on Saturday, an aide to the Ukrainian...

12/04/2021/7:58:pm
New Delhi: A Delhi court on Monday reserved its judgment on the issue of framing charges against Congress leader Shashi Tharoor in the death...