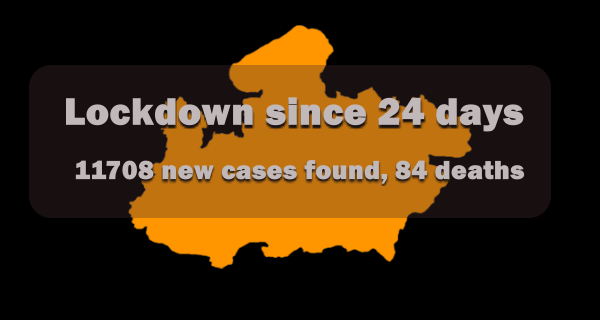 Bhopal: Lockdown in Madhya Pradesh from 24 days, then the process of getting new cases of Corona is not decreasing. Within 24 hours, 11708 new cases of Corona have been found. At the same time, 4815 people recovered and returned to their homes. Within 24 hours, the death of 84 people has been confirmed due to infection in the state. With these new cases, now 6 lakh 49 thousand 114 people have been infected in Madhya Pradesh, while 6,244 confirmed deaths due to corona infection have been confirmed. Now the number of active patients in Madhya Pradesh has increased to 95,423. So far 5,47,447 people have recovered.

Corona curfew extended to 15 May
In Madhya Pradesh, the Corona curfew has been extended till Saturday 15 May. Due to the weekend curfew already being implemented in the state, its duration will be up to 6 am on May 17. Shivraj Singh Chauhan announced this today. In his virtual address, he expressed satisfaction at the decrease in the positivity rate of corona patients in the state. Also said that the crisis is still not averted. Corona can be dealt with the cooperation of all.

CM Shivraj Singh said that health infrastructure should be strengthened more and more in the state. Efforts should also be made to produce Remedicivir in Madhya Pradesh. Oxygen plants should be set up in every hospital, such efforts should be made. Inspire private entrepreneurs to set up oxygen plants, the government is giving a grant for this.

Tunnel to be built from the residence of the Vice President and Prime Minister...

04/03/2021/9:58:am
New Delhi: The movement of VVIP people like Prime Minister and Vice President in the new Parliament of the country will no longer be...

30/03/2021/10:34:am
Kanker: Police has got a big success in Maharashtra province adjoining Kanker district of Chhattisgarh. During an encounter here, the soldiers claimed to have...