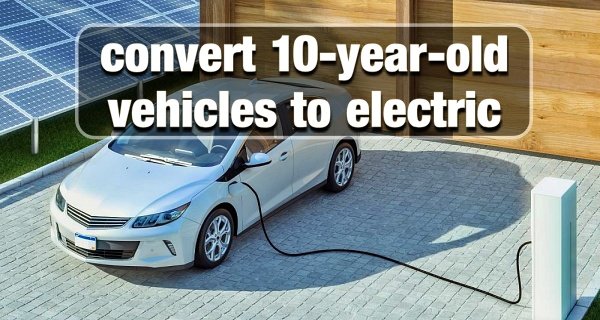 New Delhi: If you have a 10-year-old diesel or petrol vehicle then this news is for you. Delhi’s Aam Aadmi Party government has cleared the way for converting 10-year-old diesel vehicles to electric. This will be the first initiative of its kind in the country.

All the state governments including the center are making constant efforts to reduce pollution and the number of vehicles on the roads.

The Delhi government is promoting electric vehicles to deal with pollution. In this episode, the state government has taken many important decisions.

The Delhi government has approved the conversion of old vehicles into electric vehicles so that they can be run in Delhi-NCR even after 10 years.

In another decision, the government has now exempted Electric-Light Commercial Vehicles (e-LCVs) from route restrictions and idle parking restrictions on schedule.

At present, the idle parking ban in Delhi is applicable to all goods vehicles to reduce pollution and decongest the city. Delhi Traffic Police has issued a circular regarding the decision of the government.

Transport Minister Kailash Gahlot said that several rounds of discussions were held with Delhi Traffic Police to effectively implement this policy and now it has been notified.

Kailash Gahlot said that L5N class three-wheeler goods carriers and N1 class goods carriers whose weight does not exceed 3.5 tonnes will now be allowed to ply on the roads of Delhi at any time.

He said that since the introduction of the Delhi EV policy in August last year, the sales of only 46 units of e-LCV have increased to 1,054 units. And there is an increase of 95.6 percent in terms of registration. The government hopes that this decision will lead to the mass adoption of electric vehicles across all categories in Delhi.

Due to overcrowding during peak hours and rising vehicular pollution, the movement of commercial vehicles on more than 250 major roads in Delhi has been banned during the “no entry” time. Light commercial vehicles are prohibited on these roads from 7 am to 11 am and from 5 pm to 9 pm.

Ashok Gehlot said that the Delhi government is going to allow retrofitting of diesel vehicles in the city, which will be the first such step in the country. With this decision, diesel vehicles can be used even after the stipulated time period of 10 years.

He said that Delhi is now ready for electric retrofitting of the Internal Combustion Engine (ICE). Diesel vehicles, if found fit, can now be converted into EVs by retrofitting. The transport department will soon empanel manufacturers of pure electric kits by approved testing agencies so that diesel vehicles can last here for more than 10 years.

This scientist of Indian origin has an important role in making Moderna’s corona vaccine,...

11/11/2021/1:11:pm
New Delhi: Pharmaceutical companies are making vaccines to protect against Coronavirus around the world. These also include Moderna Company. The vaccine made by him...

02/11/2021/9:11:pm
This year Shri Mahalakshmi Pujan will be celebrated with great pomp on Thursday, November 4, 2021. This festival has great importance in the Sanatan...

RBI report: Employment down due to COVID crisis, it will take time for conditions...