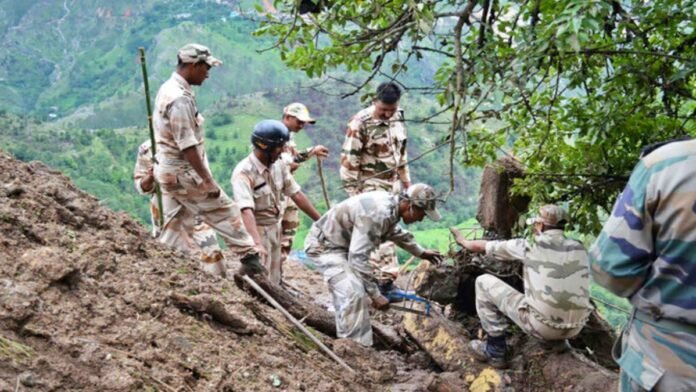 New Delhi: The death toll due to floods and landslides in the state has reached 18 this year after another body was found from the rubble in the Papum Pare district of Arunachal Pradesh. District Disaster Management Officer Neema Tashi said on Thursday that the National Disaster Response Force (NDRF) personnel had retrieved the body of a woman from the rubble at Chakma Camp-1 in Balijan. The victim has been identified as 27-year-old Momita Chakma. Apart from this, 7 bodies have been recovered so far in the Manipur landslide. The rescued people have been taken to the hospital. About 45 people are still missing. Apart from this, more than 150 people have died in Assam due to floods and landslides. In most states of the North East, life has been affected due to continuous landslides and floods.

Five people have died in Itanagar adjoining Papum Pare district and West Siang district during the past few days due to floods and landslides. Tashi also said that the search operation was resumed on Thursday to trace two people who were washed away in the flood waters in Huto village of Papum Pare district. Earlier, the operation had to be stopped on Wednesday due to bad weather.

The northeastern state has been receiving torrential rains for the past few days, causing floods and landslides in many places. Due to this communication has been lost and people have been affected. A 132 kV power tower collapsed due to inundation in the Dikrong river, disrupting the power supply in the Yupia area of ​​Papum Pare.

In the East Siang district, the water level in Siang and Sile rivers is above the danger mark and nearly 200 houses have been engulfed in water. The state cabinet was briefed about the situation on Wednesday. It has directed the Disaster Management Department to monitor the situation, issue advisories, evacuate people from vulnerable areas, and provide them immediate relief.

29/04/2022/1:18:pm
Garena Free Fire Max remains available to play and download in India, and players can use special redemption codes to enjoy free rewards. The...

Lady Police constable of Madhya Pradesh will change her sex, the government has given...

01/12/2021/8:46:pm
Bhopal: The government has given permission to a female police constable posted in the Madhya Pradesh Police to change her sex to be a...

This drug is effective on every mutation of Omicron variant, read British study

07/12/2021/10:30:pm
London: The new variant of Coronavirus, Omicron, has stirred the world. This variant is getting mutated every day. Due to which the concern has...

30/06/2021/10:19:pm
New York: New Jersey Attorney General Gurbir Grewal is going to resign to join the Securities and Exchange Commission (SEC). He is a prominent...

No need for night curfew and lockdown in Maharashtra, must wear...