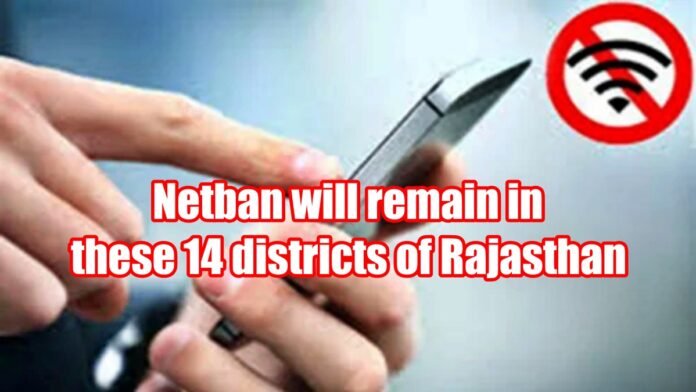 Udaipur: After the brutal murder of Taylor Kanhaiyalal by two Muslim youths in the city, the net ban in the state has been extended again for 24 hours in many districts. Online business has come to a standstill due to the shutdown of the Internet. Markets remained closed on Friday in many districts of the state. There is outrage in the whole country after the massacre. Section 144 is in force in the entire state for one month. Netbandi will remain in Udaipur for one more day. In view of the security arrangements, the administration took the decision. Internet will be closed for the next 24 hours in Udaipur and Rajsamand of the division.

Jaipur division has got some relief. Internet will be closed in three districts of Jaipur division, Jaipur, Alwar, and Dausa till 5:30 pm tomorrow, while internet services will start in Sikar and Jhunjhunu. Divisional Commissioner Vikas Sitaram Bhale issued the orders.

In the Bharatpur division (Dholpur, Karauli Sawai Madhopur, and Bharatpur) the internet will be banned. The Divisional Commissioner has again extended the time limit for the internet shutdown by issuing an order. In view of the demonstration in Bharatpur, the internet will remain closed till 12:00 pm on 2nd July. Internet of all types of telecom companies will be closed except for leased lines and broadband. In view of the demonstration, the police and administration have made elaborate arrangements. Internet service has been stopped for 22 hours in the Kota division. Earlier today the internet was closed till 6 pm only. Now the internet service done till 4 pm on July 2 will be closed. Internet service will not be available for the next 24 hours in Kota, Bundi, Baran, Jhalawar all four districts of the Kota division.

Bikaner and Churu got relief
Internet services were restored in Bikaner and Churu districts in the afternoon. Divisional Commissioner Neeraj K Pawan issued the orders. The commissioner appealed to everyone to maintain peace and harmony. Said to take action against those who disturb the law and order. Internet service was closed in all the districts of the division from June 28. Internet will be completely closed in Sridungargarh. Hindu organizations and business circles have called for a bandh over the incident in Udaipur. All the merchant establishments will remain closed tomorrow.

Some relief in the Ajmer division
Ajmer division has got relief from the net ban. Ajmer and Nagaur have been given relief from netbandi. Internet service will start after 12 o’clock tonight, while the net ban has been extended for 24 hours in Bhilwara and Tonk.
Divisional commissioner BL Mehra issued the orders.

This new discovery of DRDO may be the option of oxygen cylinder for Covid...

20/04/2021/11:13:am
New Delhi: There is no possibility of the Coronavirus Pandemic wreaking havoc in the country. The number of patients infected with COVID-19 has...

World Cancer Day: know everything in detail from symptoms to prevention

Cut-offs for Various UG Programmes will be announced on October 10:...