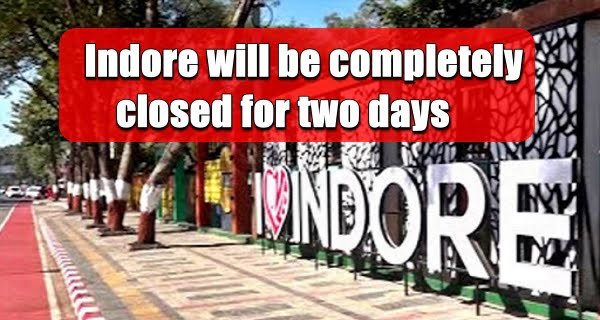 Indore: Indore city will be completely closed on Saturday and Sunday. Corona curfew will continue with strictness in the entire district. There will also be no exemption of fruits and vegetables. The district administration has issued these orders regarding the Corona curfew. During this period, there will be an exemption for medical emergencies only.

According to the information, only the distribution of milk will continue for seven days. On May 30, the Disaster Management Committee will hold a meeting on unlocking Indore. After the meeting, the proposal will be prepared and sent to the government.

Group of ministers formed for unlocking in MP
The government has formed another group of ministers to consider and implement Madhya Pradesh from June 1. This group of ministers will give their suggestions to Chief Minister Shivraj Singh Chouhan on unlocking the educational activities. Before that, 6 Group of Ministers made their presentation in front of CM today. It recommended the opening of government offices in the presence of 50% employees and the closing of mall-cinema halls. The group will be formed separately on education

From June 1, 6 Group of Ministers created for unlocking gave their presentation in front of Chief Minister Shivraj Singh Chauhan. At the same time, it was decided that a separate GoM should be created to unlock educational activities. In this, all the departments of school education, higher education, technical education, medical education have been included. The MP government has announced to start the unlock process from June 1. For this, 6 ministerial groups have been formed, who will give their suggestions to the Chief Minister.

Tips for unlock
Earlier, there was an important meeting of the Group of Ministers created in MP for the process of unlocking. In this meeting chaired by Home Minister Narottam Mishra, some guide lines of unlock have been agreed. Those who have been placed in front of the CM. Under the things agreed upon-

Petrol is near 100 rupees in most cities, know the price of your city

20/02/2021/10:39:am
New Delhi: Petrol Diesel Price is continuously increasing in the whole country. Even on the last day of the week, the prices of petrol...

Corona breaks all records in Maharashtra, more than 7 thousand cases in a day...

20/01/2021/9:24:pm
New Delhi: The 10th round of talks between the Farmer Unions and the government, which were protesting against the farm laws, took place in...