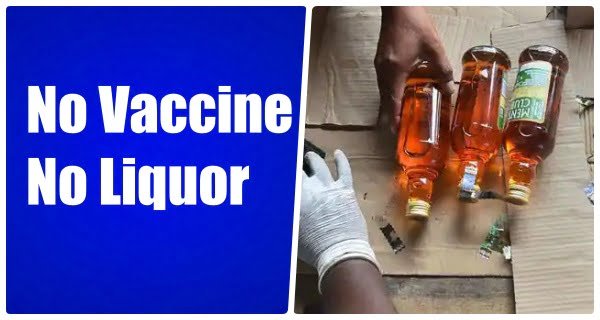 Khandwa: The Corona Vaccination campaign is being run rapidly in the country. Despite this, in many places, people are hesitant to take Corona Vaccine. Meanwhile, a big decision has been taken in a district of Madhya Pradesh. It has been made mandatory to have a vaccination to buy alcohol here.

The Khandwa Excise Department of Madhya Pradesh has issued an order. It has been said that liquor will be given to those who buy alcohol only after checking whether both doses of the vaccine have been administered.

Actually, efforts are being made to promote vaccination in Khandwa of Madhya Pradesh. For this, a new method has been devised. Those who are fond of alcohol in the district will have to give clarification regarding taking corona vaccination. In the order issued by the Khandwa Excise Department, it has been told that liquor will be given only after checking whether both the doses of the vaccine have been given to those who buy liquor.

It is being told that, in the order issued by the Excise Department, the liquor vendors have been ordered that those who buy liquor should be given liquor only after seeing whether they have been vaccinated or not. According to a report, a total of 56 country liquor shops are present in the district while 19 are foreign liquor shops.

Meeting with Pfizer-Moderna, expected to receive the corona vaccine in America from December 11

22/11/2020/11:14:pm
Washington: The United States may launch a comprehensive corona vaccine program in early December. "We will begin delivering the vaccine within 24 hours of...

Monitoring Board of Facebook will start functioning from October

25/09/2020/9:37:am
London: The much-awaited Monitoring Board of Facebook will start functioning from October. This board will decide whether any specific type of content should be...