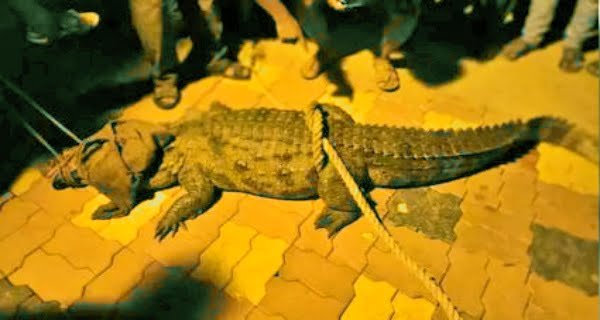 Mumbai: Crocodile is being seen in some residential areas of Sangli after the floods due to heavy rains in Maharashtra. One such case has come up in Sangalwadi of Sangli. Here a 12 feet long crocodile was spotted by the people living in the area and later rescued and handed it over to the forest department.

The video of the rescue operation of this crocodile in Sangalwadi has also surfaced. It can be seen in this video that local people are rescuing the crocodile. By the way, crocodiles are being seen in different areas of Sangli. After this, now the forest department has set up six centers in the areas to save these reptiles, prevent incidents of conflict between humans and animals.

Sangli in western Maharashtra has been affected by heavy rains recently. Due to this many places in the district have been flooded. Crocodiles have been sighted on some roads, drains, and even on the roofs of houses, as the rain fell slightly and the water level receded in the villages along the banks of the Krishna river. This has created panic among the people.

According to a report, according to forest officials, the 60-70 km stretch of the river passing through about 15 villages is home to crocodiles which include Bhilwadi, Malwadi, Digraj, Audambarwadi, Chopadewadi, and Brahmanal. In the past, there have been incidents of human and animal conflicts in some of these areas.

Tourists will not be able to roam in the rainy season

20/06/2020/7:04:pm
Thane(MH): Tourists will not be able to roam in the places of Thane district in this rainy season. Because the global epidemic corona is...

06/04/2021/10:31:pm
New Delhi: India had asked the OPEC countries to Increase Crude Oil Production to control the petrol-diesel price hike. On this, Saudi Arabia had...