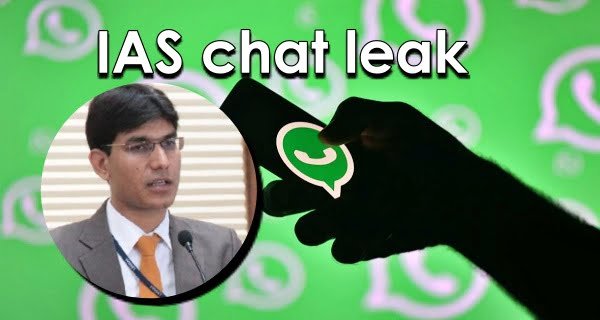 Bhopal: On one hand, questions are being raised on the functioning of the Shivraj government in Madhya Pradesh. At the same time, a ‘chat’ of IAS Lokesh Kumar Jangid, who was transferred from the post of Additional Collector in Barwani, MP, and sent to the State Education Center, has now caused a stir. Here, after this act of IAS Lokesh, the Shivraj government has also sent him a notice immediately.

In fact, Lokesh Kumar Jangid, a 2014 batch IAS officer, has had 8 transfers in his job for the last four and a half years. Recently, he has been posted in the State Education Center from the post of Barwani Additional Collector. While it did not take long for him to become the Additional Collector of Barwani. Everything was fine till now. But now in a group of IAS officers, the hot things that Jangid has written about the work of Barwani collector and officers in Madhya Pradesh has definitely heated up politics.

What is the event
Actually, in this leaked chat, Lokesh Kumar Jangid writes about Barwani Collector Shivraj Verma that “Collector Shivraj Verma was unable to do corruption(eat money), so someone filled the ears of Shivraj Singh Chauhan (Honorable CM).” Both come from the same community, from the Kirar community, whose secretary is the collector’s wife and the chief minister’s wife is the president of the Kirar community.

Not only this, but in this chat, Lokesh Kumar Jangid also wrote that after his retirement he is going to write a book and will write all the above facts in it because at present his hands are tied. He writes that “I am not afraid of anyone, so I am speaking all this openly.” Let us also tell that this chatting happened only after the transfer of Jangid. At the same time, on June 11, Lokesh Jangid wrote a letter to DOPT expressing his desire to go on inter-cadre deputation for 3 years in the home state of Maharashtra. Jangid writes that his family consists of an 87-year-old grandfather suffering from type-2 diabetes and a 57-year-old mother. In such a situation, the family needs him at the moment, so he should be given the necessary permission to go on Maharashtra Inter Cadre Deputation for 3 years.

Shivraj government sent notice:
Here, due to this chat leaked act, now the Shivraj government has also taken seriously this act of IAS Lokesh Kumar Jangid. On this, Minister Vishwas Sarang said in a conversation with the media that, “IAS officers sitting in any post have absolutely no right to indiscipline. Commenting like this about your senior officer that too publicly in an open group is a crime and will not be tolerated at all. At present, the government has issued a notice to the officer. Now he has to explain everything in it. It is well known that transfer is a routine process that all the officers working in the district have to go through. But this type of transfer should not be viewed with prejudice”.

Now Congress has also raised questions:
But now the Congress has also raised questions on the repeated transfer of IAS Lokesh Kumar Jangid. On this issue, Congress spokesperson Narendra Saluja tweeted and wrote that “A very serious case of transfer of IAS Lokesh Jangid of the state to Barwani due to corruption in the purchase of equipment used in Corona came to light. is. At the same time, the way “Kirar Mahasabha” is mentioned in his viral chat, it has also been very shocking, how an honest officer has made up his mind to leave the state. Now on this incident, Chief Minister Shivraj and his subordinates should come forward and explain the reason for his transfer and the whole situation on this viral chat. In Madhya Pradesh, even in the critical time of this corona epidemic, the bidding of posts, the game of corruption, the protection and transfer industry are going on. It is a matter of great shame. For now, more politics is expected to heat up in this matter.

04/07/2021/10:53:pm
New Delhi: Talks are going on between India and China at several levels to resolve the ongoing dispute over the Line of Actual Control...

29/06/2020/11:00:am
New Delhi: Due to Coronavirus, the strict investigation is being done at all the airports of the country these days. Travelers coming from abroad...