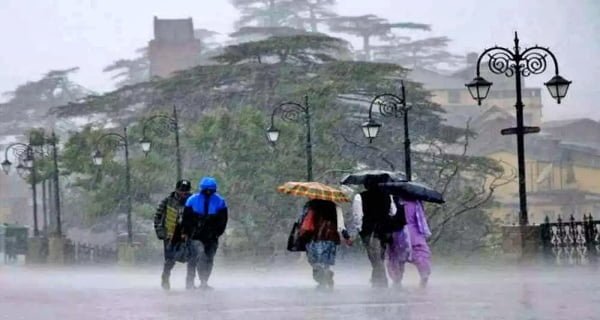 Shimla: In Himachal Pradesh, due to rain and snowfall in the month of April, it is feeling like Dinsabar. For the past two days, there has been continuous rain and snowfall in the state. Alam is that the cold has returned again. Temperatures have dropped to 5 degrees due to rain and snowfall. As of now, the mood of the weather in the state is forecast to remain poor till April 24. Due to heavy snowfall and rain, life has been disturbed in the state. Last night there was continuous rains and thunderstorms continued throughout the state. Large amounts of hailstorm have fallen in Shimla city and other parts of the district. This has damaged the apple crop.

In fact, due to the activation of Western Disturbance, Himachal has returned to cold wave again. There has been fresh snowfall in Keylong, Kalpa, Kothi in Himachal. At the same time, the snowfall continues in the tribal area Lahaul-Spiti. HRTC has also stopped bus services in Lahaul. The Manali-Leh road has once again been closed for vehicular traffic. Apart from this, the movement of vehicles has stopped due to snowfall at Jalori Pass in Kulli’s Ani. A total of 201 small and big roads are closed in the state.

Landslide in Chamba
Due to rain, a laborer has died after falling stones from a hill in Kinnaur. At the same time, big stones fell on the car from the hill on Bhanera Mangla on the plowing route in Chamba. Thankfully, two people in the car survived narrowly and the car was damaged. There are reports of tree felling in many places. At the same time, 177 small major roads are closed due to snowfall in Lahaul Spiti. There has been heavy snowfall in Lahaul.

Atal Tunnel closed
The Rohtang Pass also received more than two feet of fresh snowfall. Due to snowfall at both ends of the Atal Tunnel, the road has been closed for the movement of vehicles at present. Manali Leh road is closed for traffic. Kinnaur has 4 to 6 inches of snowfall in Kalpa, Chitkul, Rakchham, Hungarnag Valley, Bhava Valley, Asarang, Lippa. 12 cm snowfall has been recorded in Keylong, 11 cm in Kalpa, and three cm in Kothi.

On April 21, Dalhousie in Chamba received the highest rainfall of 38 mm. Apart from this, there are 14 mm cloudy rains in Palampur and 19 in Dharamsala. Mandi and Kangra received 10 and 11 mm of rain. At the same time, the administration has appealed people not to go to high altitude areas. Let us know that the weather will be bad in Himachal till April 23 and the weather is expected to be clear on 24th.

Crop damage
In Himachal Pradesh, rains and hailstorms have damaged the apple crop. During this time the setting and flowering of apples were taking place, but the hailstorms are full. At the same time, the wheat crop has also been damaged, because wheat crop is ready by cooking in the plains including Kangra. However, rain and snowfall is no less than a lifeline for Himachal, which is reeling under drought.

10/12/2020
New Delhi: The ACC and Ambuja Cements said on Thursday that the Competition Commission of India (CCI) has launched an investigation into alleged anti-competitive...

12/07/2020
New Delhi: Ministry of Road Transport and Highways has notified a draft notification proposing an amendment to the Central Motor Vehicles Rules, 1989 for...

CM Uddhav’s big decision on ‘uncontrollable’ corona in Maharashtra, ban on all kinds of...

21/02/2021
Mumbai: In Maharashtra, all public functions including all government, religious and political, social programs have been banned. Chief Minister Uddhav Thackeray has announced this...

29/11/2020
Sydney: Team India's captain Virat Kohli's record at the Sydney Cricket Ground in Australia was far worse. But in the second ODI against Australia,...