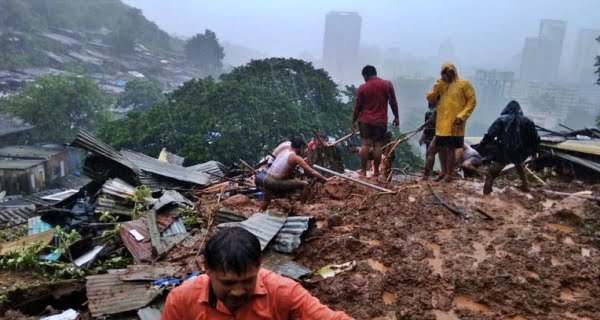 Thane: After Mumbai, now Thane has also suffered due to rain. Five people have died in a landslide caused by heavy rains in Gholai Nagar Kalwa here. Also, two others have been injured. Apart from this, four houses have also been damaged in this incident. Search and rescue operation is going on at the spot.

After Mumbai, the rain has gained momentum in Thane. Due to incessant rains, waterlogging has occurred at many places, causing traffic problems. Thane and Palghar have received 152 mm of rain from 9:30 pm on Sunday to 7:30 am on Monday.

According to the Thane Municipal Corporation, landslides occurred in Nagar Kalwa due to heavy rains. In which a total of five people died. Four women and one man were among the dead. At the same time, two people were injured after getting trapped in the debris. Both have been saved.

Accidents occurred in many areas of Thane due to heavy rains on Sunday. According to news agency PTI, the compound wall of a housing society in Kalwa and the wall of a residential building collapsed on Sunday. At the same time, four auto-rickshaw drivers were crushed to death after a 15-feet high wall collapsed in the Wagle Estate area. Apart from this, a watchman was crushed to death by falling trees.

08/01/2021/10:26:am
Washington: In the US, lawmakers of both Democratic and Republican parties are demanding the removal of President Donald Trump. Speaker of the House of...

US President Joe Biden called Netanyahu, saying – Israel has the right to defend...

14/05/2021/10:13:am
Washington: The statement of US President Joe Biden has come out regarding the ongoing conflict between the Israeli army and Hamas. Biden said about...