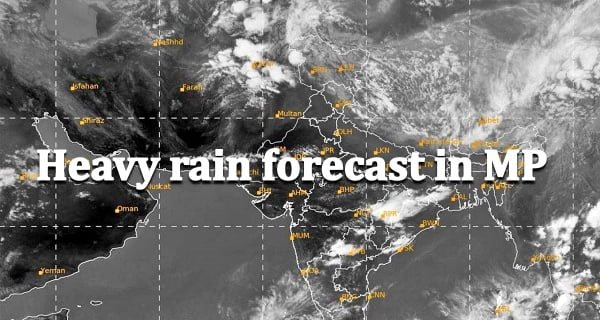 Bhopal: The India Meteorological Department (IMD) has issued an Orange Alert expressing the possibility of heavy rain and lightning in 15 districts of Madhya Pradesh in the next 24 hours. has been issued.

Senior Meteorologist PK Saha of IMD Bhopal office said on Thursday that the upcoming districts of Sheopur, Morena, Bhind, Tikamgarh, Chhatarpur, Sagar, Datia, Shivpuri, Anuppur, Dindori, Neemuch, Mandsaur, Ratlam, Balaghat, and Mandla districts of Madhya Pradesh. An orange alert has been issued for heavy rain and thundershowers at isolated places in 24 hours, with the possibility of flashing and falling.

He said that the alert is from Thursday morning till Friday morning. Saha said that during this period, these 15 districts may receive 64.5 mm to 115.5 mm of rain.

Saha said that apart from this, there is a possibility of light rain or thundershower at most places in the districts of Jabalpur, Shahdol, Sagar, and Rewa divisions and many places in Bhopal, Hoshangabad, Ujjain, Indore, Gwalior, and Chambal divisions of the state.

Saha said that in the last 24 hours, the maximum rainfall of 14 cm was recorded in Gohad, while Lalbarra was nine cm, Gorma and Morena eight cm each, Bhind seven cm, Ajaygarh, Porsa and Mau six each. cm and Ater and Khajuraho recorded five cm each.

US gave only 7.5 million doses of vaccine to India, which is not enough:...

07/08/2021/2:22:pm
Washington: Top Indian-American lawmaker has said that America has allocated only 7.5 million doses of anti-Covid-19 vaccine to India, which is not enough. He...

Slump in Asian shares extended to its fourth day

12/06/2020/8:10:pm
Agencies: slump in Asian shares extended to its fourth day and oil tumbled over growing concerns that a resurgence of coronavirus infections could stunt...

16/07/2021/1:58:pm
Kandahar: Indian photojournalist Danish Siddiqui, who was working with news agency Reuters, has been killed in clashes in Spin Boldak district in Kandahar. He was...