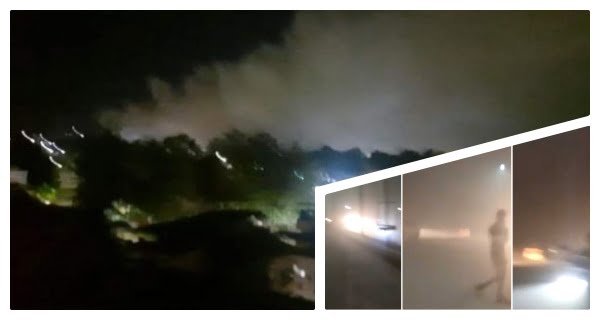 Badlapur: According to the news, there was a huge panic due to a gas leak from a chemical factory in Badlapur, Maharashtra at around 10:22 pm on Thursday night. It is being told that due to this gas leak, people of the area were also facing many problems in breathing. Later at 11:24 pm, the fire brigade stopped the leak. On this, Thane Municipal Corporation has said that at present the situation is under control and there is no report of any casualty.

In this regard, news agency ANI has released a video of the incident. In this video it can be clearly seen how the gas leak has caused haze in the entire area. At the same time, there is an atmosphere of great chaos on the road as well. Many people are also seen running here and there. Along with this, the sound of a person coughing is also heard in this video. It is being told that many people complained of difficulty in breathing.

‘Dangerous chemical reaction between sulfuric acid-benzyl acid’
On this incident, Thane Municipal Corporation said, “The chemical reaction between sulfuric acid and benzyl acid occurred in the company due to overheating which led to the gas leak incident. Due to the leak, the people of the area were finding it difficult to breathe and open their eyes.

Along with this, it was also told that as soon as the Thane Municipal Corporation got the information, the fire brigade immediately reached the factory and the leak was closed at around 11:24 pm. At present, the situation is under control. At the same time, according to Badlapur Fire Station, there is no news of any casualty in the incident.