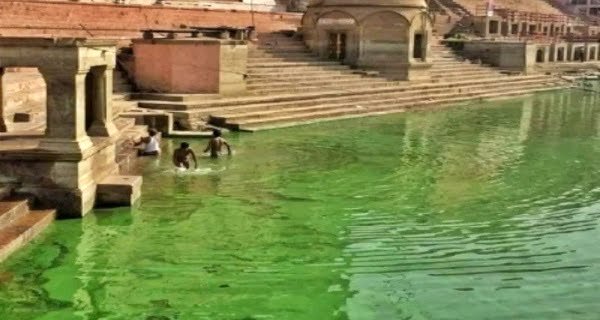 Varanasi: The matter of changing the color of Ganga in Kashi has now caught on. DM Kaushal Raj Sharma has ordered an inquiry by forming a five-member team in this matter. The inquiry committee has to submit its report in three days. The color of the water of the Ganges in the Dharmanagari Varanasi has turned green. Ghat-by-ghat green-colored water is surprising everyone. About 15-20 days ago the color of the water of the Ganges had changed, but after that, due to continuous rain for three days, this effect was reduced a bit. At that time questions began to arise that there is a lack of Aviralta in the Ganges. That is, there is no flow due to less water. Some people questioned some of the development projects and connected their connection to the Ganges without any solid reason, after which the matter got heated.

In the midst of all this, when the administration got this whole matter investigated, it came to know that this has happened due to green algae. The officials of the pollution control report also said that the green color was due to green algae at that time, but after the rain stopped, as soon as the humidity increased with the sun, the water of the Ganges once again turned green. This time its spread is more than before. DM Kaushal Raj Sharma has formed a five-member inquiry committee. The committee will submit its report to the DM in three days.

At present, prima facie it has come to the fore that this can happen through a plant in the Ganges via Chunar in Mirzapur. It is being told that due to the failure of this plant, the wastewater is not being treated. Panda-priests living on the ghat on the banks of the Ganges also say that they have not seen this before. Although they add by talking about the displeasure of this nature. At the same time, a five-member team reached Chunar in Mirzapur from Varanasi to find the place of origin of green algae and started investigating the reasons for the water being green. The committee includes ACM Second, Regional Pollution Control Board Officer, ACP Dashashwamedh, Executive Engineer-related block, and GM Ganga Pollution Control Unit.

29/05/2021/11:20:am
Washington: External Affairs Minister S Jaishankar is on a tour of America these days. On Friday, he met his American counterpart Antony Blinken. During...

22/05/2021/7:51:pm
New Delhi: A SpiceJet aircraft carrying the Indian Boxing Team along with Marry Kom has made an emergency landing at Dubai Airport. According to...