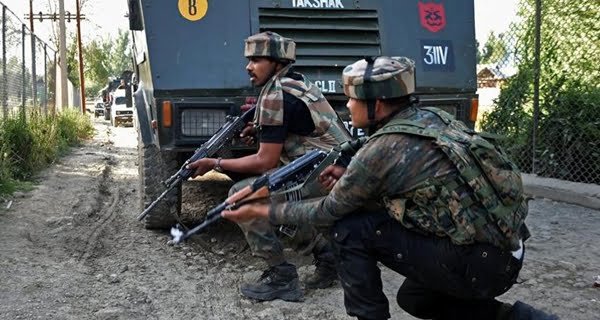 Srinagar: Four militants of terrorist organizations Lashkar-e-Taiba and Al-Badr were killed in two encounters with security forces in Jammu and Kashmir. Among these slain terrorists are those terrorists who killed a provincial army soldier on Friday. The jawan was not on duty at that time. This information was given by the police. With this, the number of terrorists killed in the encounters that began on Saturday in Anantnag and Shopian has increased to five as a terrorist was killed at the beginning of the encounter.

Police said Tausif Ahmed Bhat and Aamir Hussain Ghani were killed in an encounter at Semtan in Bijbehra area of ​​Anantnag district in south Kashmir when they refused to surrender and opened indiscriminate firing on a team of security forces conducting search operations. Both the slain terrorists were from Bijbehra area and were members of the Lashkar-e-Taiba.

“Both were wanted in a number of terrorist offenses, including the killing of Mohammad Salim Akhun, a provincial army soldier, near his home in Gorivan Bijbehara on Friday,” an official said. The jawan killed the jawan while he was not on duty. Both the terrorists were also wanted in a case of attack on a team of CRPF in which a CRPF jawan was martyred. ” The official said that the security forces evacuated all the civilians trapped in the area and halted the operation at night. The officer said that the operation was resumed in the early hours and both the militants were killed in it.

He said that the terrorists were involved in intimidating and threatening civilians in the area and inciting the youth to join the terrorist group. According to police records, Bhat was active since 2017 and Ghani joined the terrorist group in the year 2018. Inspector General of Police (Kashmir) Vijay Kumar said, “The terrorists responsible for killing the army jawan were killed in a Bijbehra encounter within two days.”

Arms and ammunition along with two AK rifles were recovered from the spot. The IGP said that one of the militants killed in the Shopian encounter had recently become a terrorist and that the security forces made considerable efforts to persuade him to surrender, but the other terrorists did not allow him to do so. Kumar said, “The parents also appealed, but the other terrorists did not allow it to surrender.”

They identified the slain terrorists as Asif Ahmed Ganai and Faizal Gulzar Ganai. Both were residents of Chitragram Kalan. The third terrorist killed has not been identified yet. Police sources said that Faizal was a minor and had recently joined the militant group. Giving information about the operation, the police officer said that after obtaining specific information about the presence of the militants, security forces laid siege to the area and conducted a search operation in the gardens of Reban Bandapawa area. He said that the terrorists were given an opportunity to surrender but they opened indiscriminate firing on the security forces. The IGP said one terrorist was killed in the initial counter-firing.

He said that both stranded militants were killed in the fierce shelling in the early hours and the bodies of the three were recovered from the encounter site. He said, “According to police records, he was part of groups involved in several terror cases and was associated with the terrorist organization al-Badr.” An AK-56 rifle and two pistols, along with other material and ammunition, including other weapons were recovered from the encounter site.

30/08/2021/9:13:am
Washington: America's top infectious disease expert says the government is sticking to the recommendation for citizens to take a 'booster dose eight months after...

Positive discussion on Afghanistan peace process between America and Pakistan

08/06/2021/10:43:am
Washington: The White House said that there have been constructive discussions between Pakistan and the US through the military intelligence unit and diplomatic channels...

US released the list of terrorist organizations, Lashkar-e-Taiba remains

16/01/2021/11:14:pm
Washington: After reviewing the Terror List, the US along with ISIL-Sinai Peninsula (ISIL-SP) and other organizations operated Lashkar-e-Taiba (Lashkar-E-Taiba) from Pakistan. ) And Lashkar-e-Ingvi...