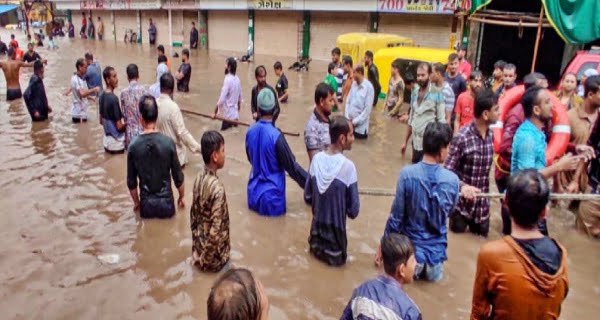 Let us inform you that NDRF Deputy Commandant Ranvijay Singh has so far rescued 39 people and 11 people have been shifted to a safe place as well as 1 dead body has been recovered. Presently 2 teams are doing rescue operations in Rajkot and 1 team in Porbandar.

The flood-like situation in low-lying areas of Rajkot-

At the same time, on the forecast of the Meteorological Department of heavy rain for three days in Gujarat, Rannvijay Singh said that there are 20 teams in the state, out of which 18 teams have been deployed by the IMD wherever there is a possibility of rain. 2 teams are kept in reserve.

It may be mentioned that 18 dams are overflowing due to heavy rains in the Jamnagar district of Gujarat. Many areas are completely submerged in water. In many areas, the first floor of the houses is flooded with water. Most of the people have taken shelter on the roofs of their houses.

23/11/2021/9:35:am
Paris: French Prime Minister Jean Castex was found infected with the coronavirus on Monday. He was confirmed to be infected just hours after returning...

Viewership Up By 30% In First Week Of IPL: Star India

01/10/2020/10:09:pm
Mumbai: Official broadcaster Star India on Thursday claimed that IPL’s viewership grew by 30 percent over last year in only the opening week of...

31/10/2020/9:55:pm
Yerevan (Armenia): The leader of Armenia on Saturday requested Russia to provide security assistance to end the ongoing battle over Nagorno-Karabakh. Tensions are running...