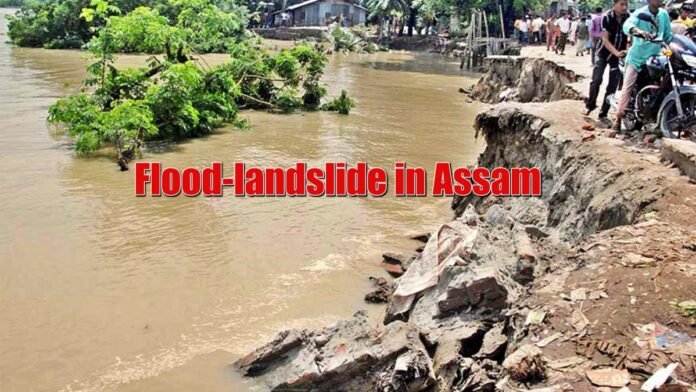 New Delhi: The flood situation in Assam is going from bad to worse. Due to continuous torrential rains and water coming from the neighboring country, life has become disturbed. A boat carrying flood-affected people capsized in Assam’s Hojai district, leaving three children on board missing while 21 others were rescued. Apart from this, a group of 24 villagers was moving from Islampur village to a safer place, when it overturned due to a collision with a brick kiln. So far around 31 lakh, people have been affected in 32 districts due to floods in Assam. Apart from this, news of the death of about 25 people is coming due to this flood. In 32 districts of Assam, water from the Brahmaputra and its tributaries has entered about 4,291 villages. So far in Assam, a total of 62 people have died in the state including floods and landslides.

However, the rescue work is going on at war-footing by the Central and State Governments. Officials say that in view of the deteriorating condition, we have made arrangements for proper food and drink. Apart from this, the National Disaster Response Force (NDRF) and the State Disaster Response Force (SDRF) have intensified the rescue operation. Many districts of Assam are continuously being affected due to rising water levels in neighboring Bhutan. The situation in Assam is expected to become direr in the coming times. But, the administration has made full preparations from its side. The rescue team is ready to deal with any situation.

Let us tell you that in Assam, many other rivers including the Beki River, Brahmaputra, Manas, Puthimari, Kopili, and Pagaladiya, are flowing well above the danger mark. According to reports, around 514 relief camps have been set up in 21 districts of Assam. According to the information, about 1.57 lakh people have taken shelter. People are constantly moving to safer places in view of the dire situation of floods.

According to the news, apart from this, other areas including Chirang, Darang, Dhemaji, Dhubri, Dibrugarh, Bajli, Baksa, Barpeta, Vishwanath, Bongaigaon, Cachar, Dima-Hasao, Sivasagar, Goalpara, Golaghat, Hojai, Kamrup are mainly affected in Assam. Has happened. Hundreds of houses have been badly affected by floods in Assam, while the other hand many bridges, roads, canals, and embankments have been damaged. On the situation in Assam, Prime Minister Narendra Modi took stock of the situation there. Apart from this, it has been said from the Center to provide all possible help to Assam.

27/07/2020/11:31:pm
New Delhi: India has lodged a strong protest with the Pakistan High Commission today on the reported incident where a Gurdwara has been claimed...

17/04/2021/10:02:pm
Moscow: Russia has detained a diplomat from Ukraine for allegedly obtaining confidential information from the database of the country's main security agency. The Federal...

09/03/2021/9:11:am
New Delhi: Due to the Corona epidemic spreading across the country, many companies have stopped functioning. According to data released by the Ministry of...