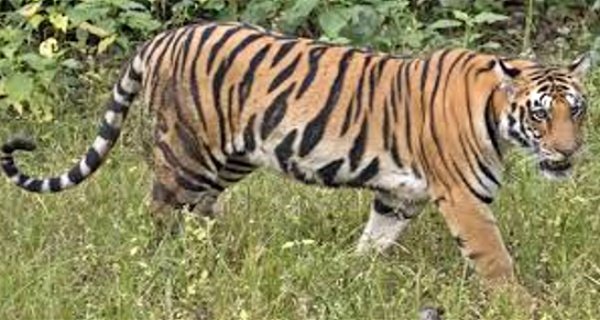 Bhopal: The first phase of the tiger census has started on November 17, which will run till January 11, 2022, in Madhya Pradesh. Evidence of the presence of tigers is being collected by dividing the nine thousand beats of the state into four phases. The first phase of 2.5 thousand beats will end on November 23. Evidence of the presence of tigers (scratches on trees, sitting-return marks on grass, pugmarks, evidence of excreta) will be searched during these seven days. The Forest Department has also started work on the third phase-out of the scheduled phases for the National Tiger Assessment. In this, cameras have started taking pictures of tigers in 13 forest divisions and forest areas of the state. 3100 trap cameras have been installed in these areas.

The fifth tiger census has started in the country, the results of which can come in December 2022. Under the national program, the census is to be conducted in four phases. In the first phase, evidence is collected at the places where tigers are likely to exist. After the completion of the first seven-day cycle, in the second phase, scientists from the Wildlife Institute of India, Dehradun, will assess the presence of tigers in the potential areas through GIS maps.

In the third phase, photos of tigers are taken by installing trap cameras. Whereas, in the fourth phase, tigers are counted in protected areas, but in Madhya Pradesh, the first phase will run for two months. This action plan has been adopted in view of the close competition with the state of Karnataka, which has been short of just two tigers for the title of Tiger State.

Actually, out of the total 30 thousand beats of the country, nine thousand are in Madhya Pradesh. It was difficult to count in such a large area with limited time and resources, so the first phase has been divided into four phases. Now the evidence of the presence of tigers will be searched in 1.5 thousand beats from 1 to 7 and 15 to 21 December and in the fourth phase which will run from 5 to 11 January 2022.

Calculation result will come soon
The data of tiger census usually comes in one and a half to one and half years because after collecting field information, its computer-assisted soft copy is prepared and sent to Dehradun. This time the employees have been asked to enter the data directly in the mobile app itself. Due to this, scientists will not have to do double effort in reaching the data and the result of the tiger census will come soon.

The Indian Army has given a strong answer to China, took back the encroached...

Shot out near White House, President Trump is taken to a safe place

11/08/2020/10:18:am
Washington: Following the firing incident near the White House, agents of the US Intelligence Service took President Donald Trump to a safe location in...