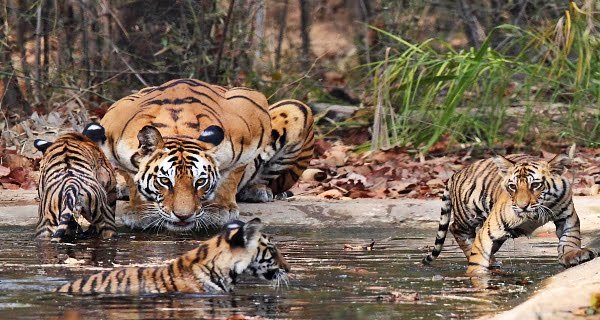 Bhopal: The preparations for the count (Tiger Assessment 2022) of tigers affected in the second wave of Corona have gained momentum again. Wildlife Headquarters has made preparations to conduct the first phase of counting in the month of October. For this, master trainers are to be prepared, whose training is starting from August 17. This time also Madhya Pradesh is expected to top the country in terms of the number of tigers. Officials estimate that the figure could rise from 526 to 700.

Its preparation is going on for the last year, but due to Corona, the preparation was affected in the state. Tigers will be counted in four phases in the state from October 2021 to February 2022. Therefore, master trainers and then employees in protected and non-protected areas have to be trained and prepared for counting. The counting of the first and third phases is to be completed by December 2021, so preparations are going on in full swing.

30 thousand employees will count
In the year 2018, 25,000 workers had counted tigers and installed 4500 trap cameras. This time there is a competition with Karnataka over Tiger State. Therefore, more than 30 thousand personnel will be fielded and more than five thousand cameras will be installed so that each tiger can be counted. After all, the question is about the ‘nose’.

Forest officials are excited after counting tigers in all the six tiger reserves of the state in January this year. He says that this time also the state will remain number one in the country. In the count, it is estimated to have found around seven hundred tigers in the state.

What will happen in which stage?
Phase One: Seven days, the workers will walk along the designated transit line in the forest to mark the tiger’s presence in the area by observing pugmarks, feces, scratches on trees, and marks of sitting or lying in the grass.

Second phase: Scientists of Wildlife Institute will study the data taken from the satellite of that area.

Step 3: Photographs of tigers will be taken with the trap camera, which will then be matched by the scientists of the Wildlife Institute.

Fourth phase: Only tigers roaming inside the Tiger Reserve will be counted.

05/08/2020/11:35:pm
New Delhi: Techo Electra has brought a new electric scooter. The company has introduced it under the name Techo Electra Saathi. It is a...

12/07/2021/9:35:am
Washington: President Joe Biden's administration in the US on Sunday upheld the previous Donald Trump administration's decision to reject almost all of China's important...