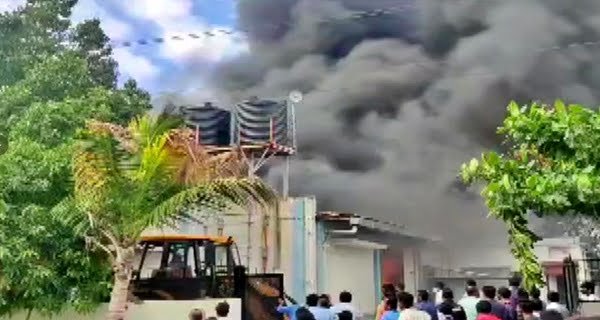 Pune: A major fire broke out at a chemical plant in Ghotawade Phata in Pune district on Monday. At least 15 employees were killed in the incident and two people have gone missing. This information has been given by the officials.

According to officials of the Fire Department of PMRDA (Pune Metropolitan Regional Development Authority) (PMRDA), at least eight fire tenders were sent to douse the fire at the SVS Aqua Technologies plant. The plant is located in the industrial area of ​​Ghotawade Phata.

According to fire department officials, bodies of 15 people have been recovered so far, while two people are still missing, they are being traced. The official said that 37 employees were posted in this company. Out of which 20 employees have been rescued.

The work of making water purifiers is done in the plant of the said company. When the fire started, it spread rapidly. Due to which so many employees got stuck in the company. However, the cause of the fire is yet to be ascertained.

China: Two ships collided at the mouth of the Yangtze River, 3 killed, 5...

14/12/2020/7:28:pm
Beijing: Three sailors were killed when two ships crashed at the mouth of the Yangtze River in China, while rescue workers are also searching...

Shivraj cabinet’s oath ceremony to be held at 11 am tomorrow, these people will...

01/07/2020/10:35:pm
Bhopal: The three-month-old Shivraj Singh Chauhan government of Madhya Pradesh will finally have its first cabinet expansion tomorrow. Cabinet expansion has got the green...

Indian students may get a big shock, can be sent back home from America

Inflation rises before the festive season! Retail inflation rose to 7.34 percent in September