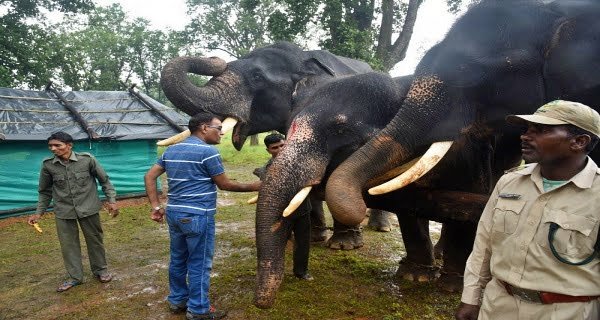 Balaghat: Kanha Tiger Reserve has a history of management of departmental elephants. There are currently 18 elephants available. Some of these elephants have been purchased from different elephant fairs of the country and some elephants have been born in the national park itself. Since the beginning, the main use of these elephants in Kanha National Park has been for wood transport and patrol work for the protection of wildlife, but later on, they were also used in tourism management. The fatigue caused by the year-long hard work of the elephants and their mahouts and their attached employees requires rest due to health-related reasons. For which they are given a week’s rest. Which is called Elephant Rejuvenation Week.

This year the Elephant Rejuvenation Camp has been started on 23rd September 2021 and will be concluded on 29th September 2021, during this period special care will be taken for the health of 18 departmental elephants. During this time, all the mahouts and charcutar departmental elephants will be in their special service in addition to complete rest, and additional supplements/vitamins/minerals/fruits, etc. will be served to the elephants. On this occasion, health check-ups of all the mahouts and charcutters engaged in the service of elephants will also be done.

During this period, elephants are brought from the forest to the rejuvenation camp every morning after taking a bath by the Charakutter and in the camp, neem oil on the feet of the elephants and castor oil on the head is massaged. After this, feeding sugarcane, banana, maize, mango, pineapple, coconut, etc. is released in the forest. In the afternoon, the elephants are brought back from the forest and brought back to the camp after bathing. After this, after feeding roti, jaggery coconut, papaya in the camp, they are again released into the forest.

During the rejuvenation camp, blood samples of elephants are taken for testing. Trimming of the nails of elephants, cleaning of stomach worms by medicine, and harvesting of ivory is done as per the requirement. By organizing such camps, on the one hand, elephants get new energy and mental relaxation, on the other hand, these social creatures get a unique opportunity to spend time together.

Relief for America, people who have been given Corona vaccine can come out without...

14/05/2021/9:23:am
Washington: Worldwide cases of Corona Infection are increasing rapidly. The number of patients infected with a corona in the world has crossed 16 crores...

PM Scott Morrison apologizes to rape victim in Australia, says it should not happen

16/02/2021/9:36:pm
Canberra: Prime Minister Scott Morrison on Tuesday apologized to a former government woman who accused her of raping a colleague in office two years...

Will Taliban regime be recognized or not? India dependent on the decision of the...

18/08/2021/10:04:pm
New Delhi: The Taliban has captured Afghanistan. Now the question is arising whether this new government will be recognized in other countries including India...