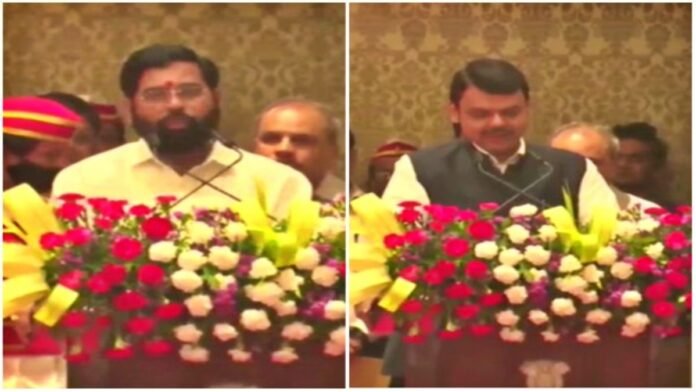 Prime Minister Modi congratulated
Prime Minister Narendra Modi has congratulated both the leaders on the oath-taking of Shinde and Fadnavis. The PM wrote, “I would like to congratulate Shri Eknath Shinde Ji on taking oath as the Chief Minister of Maharashtra. A grassroots leader, he brings with him rich political, legislative, and administrative experience. I am sure he will work towards taking Maharashtra to greater heights.”

He said, “Congratulations to Devendra Fadnavis on taking oath as the Deputy CM of Maharashtra. He is an inspiration to every BJP worker. His experience and expertise will be an asset to the government. I am sure he will further strengthen the growth path of Maharashtra.”

Congratulating both the leaders, Home Minister Amit Shah said, “Heartfelt congratulations to Shri Eknath Shinde ji on taking oath as the Chief Minister of Maharashtra and Shri Devendra Fadnavis ji on taking oath as the Deputy Chief Minister. I have full faith that under the guidance of PM Narendra Modi, this new government will work with a dedicated spirit for the development of Maharashtra and the interests of the people.

01/06/2022/9:48:am
New Delhi: According to the big news of the morning, state-owned petroleum companies have released the new rates of LPG cylinders (LPG Cylinder Price...

01/10/2021/2:03:pm
Paris: The French government is troubled by the rapidly spreading Islamic fundamentalism in the country these days. To prevent this, 30 mosques have been...

19/08/2021/2:34:pm
Mumbai:  Mzaalo, a video streaming application in the gamified video and entertainment ecosystem has announced the launch of a blockchain-based reward ecosystem that provides consumers...

14/05/2022/10:45:pm
New Delhi: India has banned the export of wheat with immediate effect to control the rapidly rising inflation. India had issued a notification in...