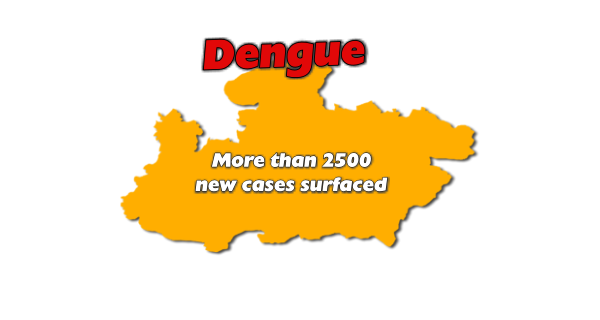 New Delhi: After Uttar Pradesh, now the havoc of Dengue Outbreak in MP continues in Madhya Pradesh too. So far more than 2500 new cases of dengue have been reported in the state. Now the Shivraj government has also come into action regarding the cases of dengue that are coming to the fore. The state has decided to conduct a campaign for larva survey in the entire state till September 15 regarding the increasing cases of dengue. Madhya Pradesh CM Shivraj Singh Chouhan himself will be involved in this.

It may be known that Chief Medical and Health Officer Dr. Manish Sharma said that the total number of dengue patients in Gwalior is 55, out of which 11 patients are from outside. We have alerted our Larva team for prevention. They are conducting a survey of larvae in 46 villages where there was a flood. You can guess the havoc of dengue in Gwalior from the fact that within 4 days, 30 children have come under the grip of dengue.

On the other hand, Indore’s Chief Medical and Health Officer Dr. B.S. Yesterday, 17 new dengue cases were reported, taking the total to 139 cases so far. Larva survey is going on for the prevention of dengue. 6 new cases of Kovid were reported yesterday, there are currently 36 active cases of Kovid. There is a rapid increase in the number of dengue patients in Indore.

At the same time, dengue investigation is being done continuously in AIIMS, BMHRC, Jaypee Hospital, Hamidia Hospital in Bhopal, Madhya Pradesh. In such a situation, if the situation does not improve, then in the coming time the figure of dengue can remain beyond 20 daily. The number of seasonal patients in hospitals is also increasing continuously.

It is noteworthy that earlier in Jabalpur, a female constable has died of dengue. The name of the female constable was Usha Tiwari. According to doctors, Usha’s platelets continued to fall and she died.

It is noteworthy that CM Shivraj Singh Chouhan has appealed to the people to cooperate with the government under the ‘Dengu Se Jung Janata Ke Sang’ campaign to stop the spread of dengue. At the same time, the Chief Minister asked the people not to allow water to accumulate in their homes and other things including coolers, utensils.

11/12/2020/5:35:pm
Melbourne: The clinical trial of a vaccine being developed for the prevention of coronavirus in Australia has been discontinued in the initial phase because...

Is China buying British schools one after another under a big conspiracy?

23/02/2021/1:10:pm
China is not only intruding in the small countries around it, but its conspiracy is also seen to make a dent in the developed...

Indore also unlocked from June 1, know about restrictions and permission

31/05/2021/9:07:pm
Indore: Indore is also being unlocked like other districts from June 1. The District Magistrate has issued orders in this regard. Know what will...

29/12/2020/9:13:pm
Washington: In an effort to reverse the victory of newly elected President Joe Biden in the US, some Republican leaders have sued Vice President...